I read about Mountain Fuel's new Jellies online recently so thought I’d try some out. Marketed as a more easily stomachable alternative to the now ubiquitous gels they look very similar to their predecessors. They are about the same size, and come similarly packaged, in long, thin, packages with tear off tops. Essentially they are liquid jelly inside. A little runnier, and a lot less sticky, than traditional gels. They are designed to do much the same as gels.

Mountain Fuel market them as: 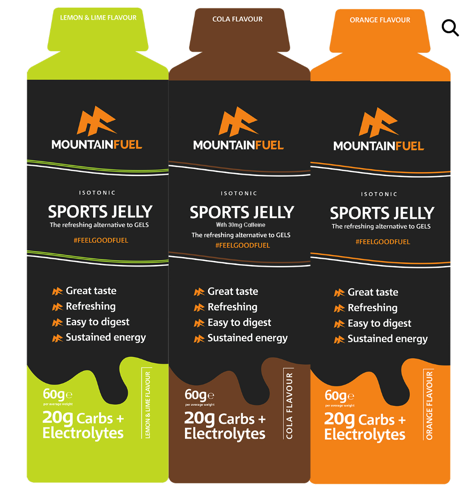 One of my early and overriding memories of intense gel use was during the Snowdon Marathon. It was my first marathon and I'd been ill for a month beforehand so had fallen off the training wagon. By a quarter of the way through I was feeling fatigued so popped a gel. I felt amazing. About 30 minutes later I was tired again so I popped another and felt amazing for a while. This went on for about 10 more miles until all of a sudden I was struck with really violent stomach cramps and had to find an emergency toilet - not an easy task in the Welsh countryside. I limped home feeling very sorry for myself and vowed to always treat gels with more respect from then on. From time to time on longer runs I've had (less violent) stomach cramps whilst using gels so I was excited to read that the main selling point of these new jellies is to reduce the risk of such cramps. Whilst I have only been using them for a while I can confirm that they are both easier to swallow, and easier on the stomach, at the same time as delivering a decent energy boost.

At the weekend I ran a 3 hour race and had a jelly after hours one and two. No problem eating them and no repercussions in my gut. Very impressed. I also topped them up with three quarters of a litre of Xtreme Energy Fuel from Mountain Fuel. It's a powder to mix with water to be drunk before exercise and then during exercise. The combo of the jellies and the drink proved a winner. I'll be buying more of both!

They retail at £1.60 per gel, though are cheaper if bought in bulk, and are both vegan and gluten free.