I've been an Alpkit fan for quite some time. If you're not familiar with the name take a look at their website. From humble beginnings they tight-knit bunch of mates appear to have flown in the face of modern commercial directives and developed a highly reputable business based on customer care and listening intently to customer feedback. They are a company very much suited to the advent of online forums and Blogs where they can react in real time to questions, comments and complaints (I recall a question on a popular forum a few Christmases back where a customer had posted a message asking if anybody knew whether he would receive his goodies by last post and in time for Christmas. Within half an hour of the post going live there was a photo of one of the Alpkit guys trudging through knee high snow out of the industrial estate where they are based on the outskirts of Nottingham, with a package addressed to the message-poster! Even if it was set up it was a stroke of genius and the sort of attention to detail that the big dogs just can't match.

Anyway, on with the review. Jeans are without a doubt the most popular type of trousers in the Western world. Worn by virtually every man and a sizeable number of women virtually every day of their lives, it made sense for somebody to catch in on this vast, vast market, and produce a pair that are suitable for true 'outdoor' use. They are water resistant, wind-proof, and breathable, but look like regular run-of-the-mill jeans. The only way that you'd tell they are not regular Jeans is that the material feels a teeny bit stiffer due to the waterproofing. If you do get caught out in the rain in them they are nicely waterproof, but do soon start to feel clammy as do any waterproof and breathable trousers on the market - but that's a whole lot better than the cloying, claustrophobic feeling of wearing wet Jeans! I've had them now a couple of months and worn them probably every other day. There's a teeny unravelling of stitching down the outside of the left leg which you wouldn't notice unless you were actually reviewing them, and the left hand pocket has a very small bit of stitching coming adrift. I called Alkpit about both of these issues and they offered to take a look, and assured me that nobody else had had the same issue.

Retailing at £50 (though I noticed they are cheaper in the current sale!) they represent good value for money and the funky zig-zag mountain scene stitching on the back pockets makes you stand out from the crowd in a subtle manner. 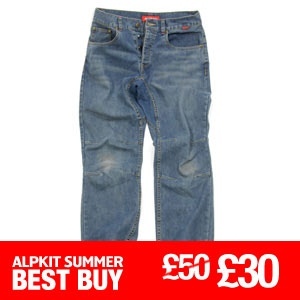