I've got to get this off my chest first and foremost. Aside from Southern Sandstone where the rock is so soft that lead climbing is prohibited, I can't think of a single instance in the UK where top roping is condoned. On the other hand it is more often than not dismissed out of hand, with those practicing it being vilified, on various popular internet forums. So it came as something of a surprise when this guide arrived and not only covered top roping as a discipline in its own right, but shouted about it on the front cover. Perhaps its because there is just so much more rock over in the States? But we're talking Yosemite - the sacred Mecca of all climbing. I think it's more down to the fact that Americans are generally more supportive of each other than we Brits. I'm currently watching a whole load of adventure films in preparation for ShAFF 2011, and it is really evident in virtually all North American films, that this is the case. Consider the tragic deaths of three of the US's top Aplinists in the Himalaya last year - the response back home was for a bunch of their best mates back in Colorado to drop what they were doing and head out on a rescue mission. You may wonder where I am going with this? Well I think that most climbers, at some point, enjoy a bit of top roping, but here in the UK it's so frowned upon that people, unless ignorant of the situation, are scared of doing it. In North America it's clearly a different kettle of fish.

OK, so this is a guide to Sport Climbing and Top Roping in Yosemite Valley. Basically Yosemite is known primarily for its Big Walling, Tradding, and to a lesser degree, it;s bouldering around Camp Four. Other than the Bachar Yerian, Sport Routes don't really feature as a characteristic discipline of the Valley. Given that the guide is only 115 pages, and Yosemite Valley is home to more rock than most of England, one could argue that there's a reason Sport Climbing doesn't feature much. But the guide is packed pretty tightly with well drawn topos, decent route descriptions where necessary, first ascent details and, again unusually for us Brits, a 5 star grading system. There are enough photos of chicken heads, splitter cracks and death-looking slabs to inspire even the most die-hard adventure climber to dip their toe for at least a route or two. In fact, when you consider that the bolting ethic in the valley is to do so on-lead, the result is more often than not, a sparsely, but well protected route which actually suits the adrenaline seeking adventure climber very well indeed.

Written by Yosemite guru and Supertopo owner Chris McNamara, and Chris Van Leuven, the book includes over 200 selected routes and retails at around £16.95 in the UK. 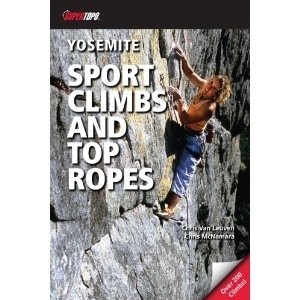