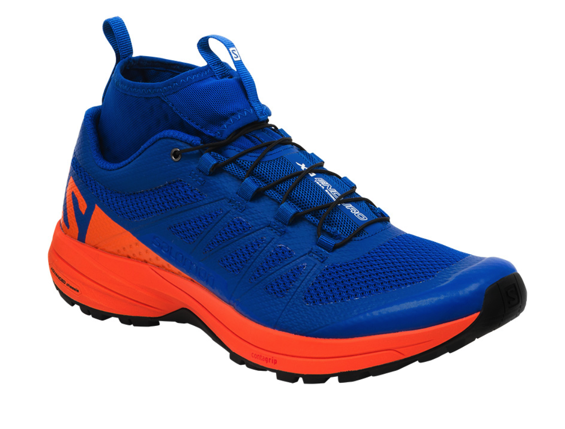 It's been a while since I've tested a pair of shoes with a genuinely (and obviously) new feature, so I was interested in the Enduro. The new feature is effectively an elasticated upper integrated into the main shoe, that protects the ankle as well as keeping out bits of grit and heather. It kind of turns the shoes into boots, but without the rigidity of boot uppers. To aid getting the shoes on there are pull loops on the top of the upper, both front and back, and it takes both hands, a finger from each in each loop, to pull them on. Once they are on they feel much the same as a normal pair of shoes, but with a snug gaiter on the ankle. The joy is that, because the upper is fixed to the shoe it stops stuff getting in. Over the weekend I spent 7 hours running up and down Kinder, the vast majority not on paths, so in heather, bracken and bilberry, often up to knee height. At the end of the run I had no irritating bits of detritus inside my shoes. That's remarkable!

Aside from the funky new uppers the shoes have taken a fairly significant step away from what I am used to from Salomon (Speedcross, Spikecross & Fellcross) in that they are not waterproof. Whereas the latter keep your feet fairly dry until you actually submerge them in water, the Enduro have more of a lightweight mesh upper, meaning that your feet will feel wet even running through damp grass. Initially this was a surprise, but given that most runs I go on will end in wet feet it's hardly a major concern. On the plus side it means that they are lighter - 300g (Speedross3 are 313g), which is impressive given the added material used in the ankles. It obviously makes them super breathable too, so good for warm weather running.

Stability wise I have no complaints whatsoever. I ran for seven hours over some of the toughest terrain imaginable, without any twists or turns as a result of the shoes. They were comfortable for the entire run. Not once did I have to adjust the laces having pulled the toggle tight and tucked it away into its 'garage' at the start of the run.

`It could be argued that the only downside is the price. £129.99 is a fair whack to pay for a pair of shoes, but as I've said in reviews of other Salomon kit, they push the envelope when it comes to new features, they test their products on the best runners, and you pay the price. They are a seriously good pair of shoes.