It wasn’t until I read their weight that I realised what the 295 stood for! Sensible I suppose, but it always confounds me when products are given numbers as numbers just aren’t sexy. Talking of sexy it’s not a word I’d use to describe the look of these shoes either. 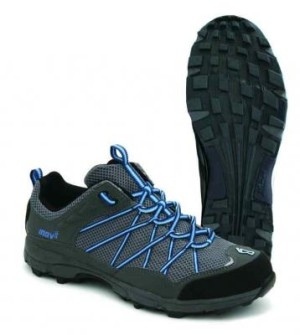 There, that’s the negatives out of the way, let’s get on with the positives. What a great pair of running shoes. Incredibly lightweight, incredibly grippy both on muddy ground and wet rock, the two toughest test pieces. According to the official blurb: the patent pending Fascia-band aids propulsion efficiency of the running cycle. I’d agree with this. Combined with the high profile rubber spikes which cover the whole of the tread there is a real bounce to the shoe, feeding back a massive amount of energy into each stride, especially on the harder surfaces. On soft, steep, muddy surfaces where I’d previously have been slip-sliding around, I’m now able to actually accelerate on the uphill and throw caution to the wind on the downhill. So far breathability has been good, with no noticeable odours emanating from the shoes, though the thin, lightweight upper is prone to letting in water in damp vegetation / wet roads, meaning that the shoes need drying after most runs.

Gripes and concerns centre on the lack of support for the ankle afforded by their low-profile of the upper – but then again, how else would they shave the weight down so drastically, and I do suffer with weak ankles – and the short laces. Longer laces might have added another gram or two, but would have made life a little easier when putting on the shoes. On that note the pull loops on the heels of each shoe are too small to put a finger through rendering them all, but useless unless you have a dedicated pulling device like a tent peg to hand! I reckon they could have kept the weight under 300g and added longer laces and longer pull-loops.

Build quality seems very good and Inov-8 certainly seem to have a good rep in this department. RRP is £65 which is very reasonable for a performance shoe. All in all a strong pair of shoes for any off-road runner.