I finished Cold Wars last night at 11.30. It was a thoroughly good book Im somewhat surprised to say. I read Psychovertical (his first book) and was a little disappointed. Ive seen Andy on stage and in the flesh enough times to know that Psychovertical just wasnt funny enough. I also didnt care too much for the structure, alternating chapters between his ascent of Reticent Wall and his background life-story. Others loved it. I wasnt as convinced. Cold Wars, whilst still dark and sometimes pretty depressing, is an altogether different beast. Its funny throughout, each chapter is a story I its own right, simply excerpts from Andys life told in chronological order, but most importantly the writing is better. Psychovertical was by no means bad, especially for a first book, but Cold Wars is very good indeed. Its often difficult switching from reading a James Ellroy or a David Mithchell best-seller to a climbers autobiography. They are just not in the same league when it comes to actually writing. Of course, Im not putting Andy in the same class as Ellroy (who, interestingly, he refers to in the book) or Mitchell, but hes definitely proved himself as a capable writer.

Cold Wars is 266 pages long, comprising 19 chapters, mostly about climbs in the mountains in winter, the rest about his life when not climbing. He spends a great deal of time discussing his family, most of all his kids, to whom the book is dedicated. Unfortunately for Andy it appears that despite loving his family, he struggles to find the balance between family life and climbing life, between responsibility and irresponsibility, drawing parallels with his own absent father during childhood, and his absences from his own kids and wife. Its easy to sit and judge somebody based on their actions, but their actions will virtually always only tell a part of the story. In Cold Wars Andy has attempted to tell the rest of the story. Its almost a book of excuses for his failings, and will no doubt have been painful to some of those closest to him.

His family arent the only ones in the spotlight. Ian Parnell and Paul Ramsden are two of his closest climbing partners and between them, account for the lions share of the action-based chapters. In describing his partners he is often fairly disparaging, jealous of their lifestyles free of ties, and their actual climbing ability, but any derogatory comments are far outweighed by his own ridiculing, and equal amounts of praise for the same partners. So much so that you cant help feeling that the master story-teller is perhaps exaggerating things just a bit. How can he be as rubbish as he claims, yet do the things that he does? That said, Ive seen it first hand, at a lecture Id organised for him to give at Swansea Climbing Wall. The morning after the lecture I bumped into him in the car park rooting around in the back of his car for a toothbrush. Anybody else would have kept theirs in a wash bag. Andy found 4 of them, all equally covered in dust and rubbish, in the boot along with what looked to be his life-on-the-road. Here was a stand-up genius who had entertained a hundred people the night before, who couldnt even look after his own teeth.

As with most books on climbing I tent to enjoy the non-climbing chapters best, learning about the interesting stuff that doesnt make it into the magazines or onto the websites. Like working on the set for Charlie And The Chocolate Factory or a visit to see his dad in Llanrwst. The climbing chapters too, managed to retain my interest largely as a result of Andys ability to create tension through words. The dialogue was sometimes a little forced theres no way one can remember what was said word for word in so many conversations so there has to be an element of artistic licence but by and large flowed well and kept me wanting to read more.

Perhaps what made reading the book a little more memorable was the fact that whilst I was reading it, Andy was out in Norway attempting to solo Troll Wall again and was blogging about it daily. His blog posts mirrored the chapters in the book. Epic and difficult, yet bumbling and lucky to be alive at the end of it. The fact that he didnt make it to the top again but was alive and happy, was pretty much reflected in the final chapter of the book which ends on a kind of high and low note at the same time. I wont give any details as that would ruin it for you, suffice to say that its not always an easy read, but one that appears to be very honest.

Vertebrate seem to have a knack of picking good books to publish and theyve done it again. 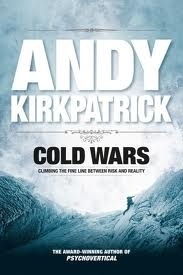