Published by Ground Up Productions - Dec 2008 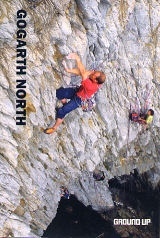 Scarcely has a guide been more eagerly anticipated than the recent offering from the North Wales based Ground Up crew. And after their popular first effort “North Wales Rock” published in 2007 it was a tough job to follow up to ensure that justice was done to the complex and extensive trad-climbing Mecca that is Gogarth.

The photo on the front cover, of George Smith - perhaps Gogarth’s most prolific adventurer, climbing “The Mad Brown” encapsulates so much that is true of many a Gogarth climb; funky holds dictating unusual moves and meandering lines through impressive territory – with a healthy dose of mind blowing exposure and a hanging belay thrown in for good measure.

The rest of the photos within the guide don’t disappoint either, clearly illustrating the long and continuing history; from Leo Dickinson’s stunning photo of Drummond and Pearce tackling the first ascent of Dream of White Horses in 1968 to the likes of Pete Robbins, James ‘Caff’ McHaffie and others holding the candle for today’s generation of ground-breaking climbers pitting their wits against arguably Britain’s finest adventure climbing playground. The combined knowledge of Gogarths pioneers, both past and present has been used to give the most detailed and up to date information possible.

I can’t claim to have used the guide to its full-potential yet, but from the times I’ve used it so far this summer, combined with plenty of time spent enjoyably perusing the guide whilst sat at home in the rain, the maps and descriptions seem clear and accurate – no mean feat for an area as complex as Gogarth. The plentiful and clear photo-topo’s and maps are a welcome addition; not only for discovering the line of your chosen route, but also the major abseil lines.

Crag aspects and approach times have been included, as has an imperative staring system, but they have also added a useful colour coded graded-list featuring the classics to help give an overview of the best each area has to offer.

Not only have the notorious adventure routes been included but some will be pleasantly surprised to find several worthwhile sport crags found on Anglesey also included in the guide – giving an alternative to those looking for a milder experience.

For all comprehensive guides to traditional climbing areas a detailed historical section is obviously essential, not least for an area with such a rich and adventurous history as Gogarth. With 20 odd pages, stretching back more than 50 years there are plenty of anecdotes sure to inspire even the most devoted Gogarth visitors.

For those already familiar with the unique climbing experiences on offer at Gogarth, this guide will undoubtedly come as an almighty relief. And for those who have never sampled the delights of Gogarth, but are planning a visit, it’s an absolute must. Priced at £18.99 it is worth every penny, and some!