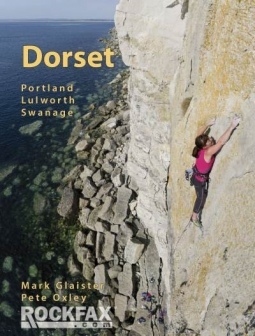 I’ve been climbing for more than twenty years now. I’ve climbed across much of the UK, but the south coast is somewhere I’ve only been three times. Don’t know why. It’s just panned out that way. Twice deep water soloing and once sport climbing in some grotty quarry. It’s a lovely part of the world, the weather is generally pretty good, and, as this guide illustrates, there is a wealth of climbing down there, much of it very good indeed. Given that Dorset is virtually world renowned for its deep water soloing I thought it was a strange choice to omit reference to it in the first page which says the guide is ‘a guidebook to the sport and traditional climbing on Portland, Lulworth and Swanage. A little digging uncovered the fact that the guide does after all include DWS, but not in as much detail as Rockfax’s ‘Deep Water’ book. Still, it’s a relief to see that most of the best areas and routes are included.

Just the three areas covered give us a whopping 424 pages of climbs. Staggering really. I’ve reviewed enough Rockfax guides now to be able to say that the topos, maps and general route information is up to scratch, complete with intuitive icons which tell you at a glance what to expect from a route. The book is packed as usual with inspiring colour photos of climbers on the routes, a healthy mix of men and women. I thought that the photos in general were not as pin sharp as in previous guides, but this doesn’t really detract from the overall quality. The cover shot for one is sharp and inspiring. It’s been written by local activists Mark Glaister and Pete Oxley so you can be sure that it’s bang up to date and as accurate as a guide can be.