Canoeing the Congo by Phil Hayward 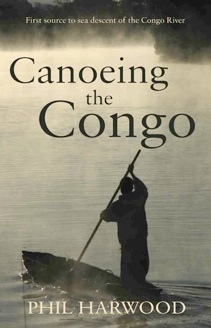 Last year (2011) at ShAFF Phil Hayward came to the festival to introduce his film, a 20 minute short filmed and edited by himself, on his solo canoe expedition down the Congo river. A few months previously I had read a book called Blood River, about a journalist’s travels through the Congo. The journalist had painted such a bleak picture of the country that I found it hard to fathom how somebody could contemplate embarking on a canoe journey there all alone.

Well having met Phil, watched his film, and now read his book, it’s clear that he is no ordinary man! With a military background Phil is not what you would call aggressive, but he certainly doesn’t shy away from confrontation, and this, it seems, was the key to his success in the Congo. Whenever he was confronted by anybody, from tribesmen to drunk officials, he stood his ground and did not part with any of the money he was carrying on his person. He did recruit guides at times who acted as body guards, and chose well. At one point on the trip he is pursued by a band of machete wielding men who are clearly going to overhaul him and most likely kill him, so he decides to turn and face them, machete of his own in hand, and they retreat, clearly not expecting a madman, and each fearing for his own life.

The book is basic in many ways. Phil is no seasoned travel writer, but the story is so compelling and Phil such a character that the rawness of his style actually helps to paint the picture of a slightly insane, but fun-loving guy throwing caution to the wind and taking on what must rank as one of the most audacious journeys of the modern era. Had the very same story been written by a journalist one might have felt that it had been embellished and exaggerated. The fact that Phil has written it leaves you in no doubt as to its authenticity! In fact he dismisses Blood River as just such a yarn.

If you fancy immersing yourself in another man’s madness by means of adventure travel then check out this book.

You can buy both the book and the film here.

You can also listen to a Heason Events Podcast with Phil here.

In October 2008, I made the first ‘source to sea’ descent of the 4700km Congo River in Central Africa, from the true source in northeastern Zambia.
My book and film tell the story of my five month solo journey by canadian canoe through the Democratic Republic of the Congo. I experienced swamps, waterfalls, rapids and endemic corruption. Arrested, chased, collapsing from malaria with numerous death threats I also encountered tremendous hospitality and kindness from a proud and brave people long forgotten by the western world.

And lastly here is the trailer to his film: