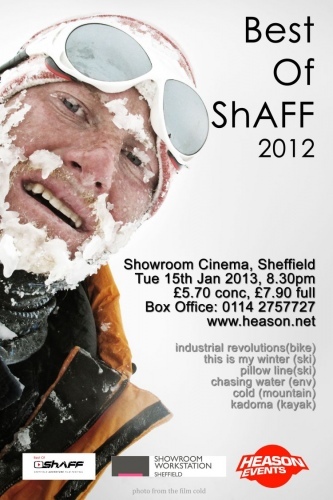 A look back at some of the best films from 2012. If you didn’t catch them here’s your chance to do so. If you did, well, come and watch them again!

This Is My Winter – 26mins – Skiing
Follow big mountain snowboard legend Xavier de la Rue through a whole season. Includes a hair-raising 4 hour descent down one of the most mythical ski descents in Chamonix, the 3,700m Aiguille de Plan. Runner Up - Best Adrenaline Film ShAFF 2012

Pillow Line – 5mins – Skiing
An amazing, amusing short that uses an innovative stop motion technique to show the world of skiing in a whole different light. Ski the pillow line without ever getting out of bed.. Winner - Best Short Film and Runner Up - Hammer Design Best Artistic Film ShAFF 2012

Chasing Water – 18mins - Environmental
For six million years the Colorado River has flowed from its desert source 1,500 miles to the sea - until now. Photojournalist Pete McBride sets out to follow the river of his childhood to find out how long it takes the water that irrigated his family's ranch to reach the ocean.. Runner Up - Best Environmental & Culture Film

Cold – 20mins – Mountaineering
"What am I doing here? We have to get down." Climber Cory Richards films himself and 2 colleagues attempting to bag a first winter ascent of the 8000m+ Gasherbrum II. Cold is a representation of what goes on in a climber's head - thoughts about their family, their life and their doubts and fears.

Kadoma – 42mins – Kayaking
Kadoma was a nickname for Hendri Coetzee, a legendary South African kayaker who had explored some of Africa’s wildest rivers.  American pro kayakers Chris Korbulic and Ben Stookesbury followed Coetzee into the Democratic Republic of Congo for a first descent of the dangerous Lukuga River. Seven weeks into the expedition, tragedy struck.  . Runner Up – Best Spirit Of Adventure Film ShAFF 2012