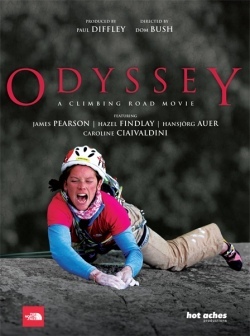 Heason Events and The Climbing Works are proud to announce the World Premiere of Odyssey on Saturday 10th November. An epic & amazing climbing trip with some of the World's best climbers attempting some of the most iconic British trad routes.

The evening will consist of a talk by James Pearson followed by the film and a Q&A session with James, Caroline Dom Bush and Paul Diffley all in attencence to take questions.

You can purchase tickets online or at reception (£5 / £4 concessions)

Producer Paul Diffley Diffley has teamed up with global climbing apparel giant The North Face to attempt a daring alternative to the usual festival launch route.  The film is being premiered at the world’s biggest bouldering wall, The Climbing Works, Sheffield, on 10th November and at the same time will be available to view on free stream via the Hot Aches website for 10 days.  During this time the film will also be available to buy on DVD or via download at a reduced price.

Paul Diffley says:  “We wanted to hold the premiere at a grassroots climbing location and Sheffield is the self-declared centre of the UK climbing scene.  By screening ‘Odyssey’ at a climbing wall it’s giving something back to grassroots climbers and it has a good feel, particularly combined with the worldwide online launch.”

Brian McAlinden, General Manager at The Climbing Works, Sheffield said:  “We’re delighted to host this innovative premiere.  It’ll be a real treat to have James. Caroline, Paul and Dom at the screening to give the audience a flavour of what it’s like both in front of and behind the camera on an epic climbing trip.”

Heason Events & The Climbing Works are pleased to team up with Hot Aches once again.  Matt Heason from Heason Events who organises the Sheffield Adventure Film Festival said:  “A few years ago we held a multi-screen, simultaneous screening of ‘Committed 2’ at the Climbing Works which was a big success so it’s exciting to be working with Hot Aches again on pushing the boundaries of film distribution.”

Read more on UKClimbing about the trip>>

Here's a review of the film.

And here's a teaser clip: