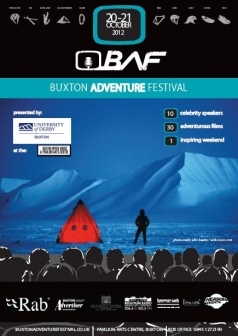 Buxton Adventure Festival is a brand new autumn festival brought to you by the organisers of the Sheffield Adventure Film Festival.

A celebration of the very best speakers and films from the world of adventure travel & sport, at the heart of Derbyshire's Peak District.

Inspirational - tales of adventures brought to life by world-class speakers and top film-makers.

5.30pm Wild Vision
Internationally renowned nature, travel & adventure photographer, John Beatty's images capture the timeless rhythms of the natural environment, its beauty and simplicity and man’s place within it, celebrating the variety and magnificence of wild landscapes.  (Read more)
Followed by films:
Irridium (8mins)
Dark Side Of The Lens (6mins)

8pm Adrenaline Junkie
This summer ex Para & pro stuntman Gary Connery became the first person ever to jump out of a helicopter and land without a parachute, using his wingsuit to land in a pile of cardboard boxes! And to top that, he then went on to star as the Queen's stunt double in the Olympic opening ceremony.
Followed by films:
I Believe I Can Fly (40 mins)
Reel Rock: Sketchy Andy (20 mins)

12.30pm Feet in the Clouds
As a southerner, fell-running seemed like an obscure and reckless northern pastime to journalist Richard Askwith but he got hooked on running up and down trackless mountains in all weathers and his book 'Feet in the Clouds' has become something of a cult classic.
Followed by films:
The Epic Tri (38 mins)
Onwards (6 mins)
14 Peaks (12 mins)

3pm Into Darkness
Gavin Newman is one of the world’s leading cave divers and an award-winning film maker and photographer whose work includes filming for the BBC's iconic Planet Earth series.
Incorporating the film:
Into Darkness (15 mins)
and excerpts of Gavin's own award-winning footage

5.30pm Fiva - An Adventure that Went Wrong
Gordon Stainforth - writer, photographer, film editor, philosopher and experienced climber - tells the tale of he and his twin brother's near escape on an ascent of Norway's long and dangerous 'Fiva Route'.
Followed by films:
50 Years In The Mountains (20mins)
Samsara (22mins)