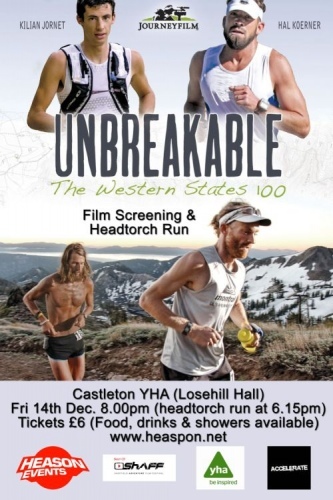 After ShAFF in March we received a flurry of emails from people asking us to arrange a repeat screening of the Grand Prize Winner Unbreakable: Western States 100. Apologies it's taken so long, but we've finally arranged a screening. It's going to be at the Castleton Youth Hostel in their brand new cinema room on Friday Dec 14th. Note the Castleon YHA has moved from its old site in the village out to Losehill Hall on the edge of the village (Castleton, Hope Valley, Derbyshire, S33 8WB).

The film, which is just over an hour and a half long, will start at 8pm. Tickets will cost £6. If you fancy getting in a little exercise pre-film, Accelerate Sheffield will lead a Head Torch run from the Youth Hostel which will start at 6.30pm (arrive for 6.15pm). There will be a couple of groups, one faster than the other, so it should cater for all abilities. Bring your own lighting and kit.The runs will last 45mins to an hour. Accelerate have also kindly offered a couple of £25 vouchers to raffle on the night too.

Note that the button above is to buy 1 ticket. If you want more than one, you'll have to click and pay more than once. There's no booking fee though. We cover that.

Here's what the judges said about the film after ShAFF:

The Sheffield Adventure Film Festival is delighted to announce that ‘Unbreakable: The Western States 100’ has won the 2012 ShAFF Best Film award.

Festival Director Matt Heason says:  “It’s a double first for ShAFF - the first ever running film to win and the first feature length film to win.  What makes it stand out in a year where we’ve had a record-breaking number of films on show is the brilliant story telling and characters.  And it proves you need nothing more than a pair of trainers to have an adventure.   And just to prove what a great film it is, with a week to go, it’s sold out.  But don’t worry - we’ve put an extra showing on Sunday evening.”

Sheffield Adventure Film Festival Judge, Team GB duathlete and Adventure Sports Writer Nikalas Cook says:  “My fellow judges Lucy Creamer and Tim Glasby and I were in total agreement about ‘Unbreakable’.  The 2010 Western States 100 was a perfect storm of a race with four of the greatest, undefeated mountain runners on earth fighting to win the oldest and most prestigious 100-mile foot race in the world.  Even if you already know the result, it’ll still have you on the edge of your seat right down to the final few miles.”

Fellow judge, Lucy Creamer, the UK's top female climber, says: "I’m not a runner, so having to watch a running film that was an hour and a half long was not an exciting prospect. But I have already watched this twice and now can’t wait to see it on the big screen. It is an extremely well put together film that combines different stories interweaved throughout to create genuine interest in these world class athletes; the race itself leads you towards an incredibly nail biting finish. How can a running film be nail biting? Well, watch this and you’ll find out. An absolute joy that almost made me want to go out running- not a hundred miles though!"

Here's the trailer to the film.