For years I used to use Picasa, a Google-owned piece of software for managing my photos on my computer. Initially on a PC, and later on a Mac as I switched platforms. About three years ago Google announced that they were to stop supporting and developing Picasa I favour of Google Photos. To hundreds of thousands of people around the world this was a bit of a poke in the eye by Google as the two things are completely different. Picasa continued to work, but with each new operating system update it became increasingly clear that without continued support, it would eventually become unusable.

If you are not familiar with photo management software, there's one basic principle which most programmes stick to which leaves you somewhat vulnerable to the sort of move that Google pulled. When making edits to your images, the actual source files remain unchanged, the edited photos only showing their enhancements if viewed through the software. There is always an export function to enable you to create a new version of the image with the edits included. Picasa even has a function to save the edits to the source file. The issue is, however, that there is no bulk feature to do this for your entire collection.

Faced with the prospect of using a useful bit of software that was likely at any point, to fall over and die, I spent a couple of years searching for alternatives. Surely somebody out there would recognise the fact that there were folk posting on forums all over the world who were in the same boat and looking for an alternative to Picasa? Perhaps somebody would even acquire Picasa  from Google and re-invent it?

Eventually I stumbled upon Mylio. Essentially it's a similar piece of software to Picasa, but has been designed with multiple devices in mind - i.e. not only your computer, but your phones, tablets, etc. The biggest difference is that where Picasa was free, Mylio has both a free version and a couple of premium paid for options.

First thing is first: I was looking for something that could simply take everything from Picasa and import into Mylio, carrying over the edits made in Picasa. That's not possible. I first had to save what edits I wanted to keep to the original files, and then do the import. It took me a while, but I did it.

Once that was done, the setup process was straight forward. Download and install the software, specify where the photos are that you want to manage, and specify any number of backup drives, called a Vaults. I have a Mac, an iPad and an iPhone so installed the software on each device. I use my Mac as the master device where the actual photos reside, but it's possible to keep copies of the photos on all devices should you have the room to do so and want to. It takes a bit of time for all our devices to synch up properly, but once they do, it's pretty seamless. And very impressive.

As well as synching your photo folders it also has a second stream which synchronises your device photos. On each device I see two folders at route level: Pics (my name for my master photos folder, and Mylio Pictures. Within Pics there are sub folders galore based on my own naming convention (2019 11 Bonfire night etc) so it's pretty quick to drill down by date and find stuff. Within the root directory Mylio Pictures there are then two subfolders, My iPhone and My iPad. If you take photos on the phone it’s necessary to boot up the software on the other devices whilst it is running on the phone in order to let them synchronise. Same for the iPod. I guess it would also work for the Mac if I used it to take photos…

I've described things from a folders perspective as that is my preference for finding stuff. However Mylio also offers a few other options. There is a catch-all 'All Photos' which lists every photo across all devices chronologically. I can't cope with that as there are over 60,000 photos. 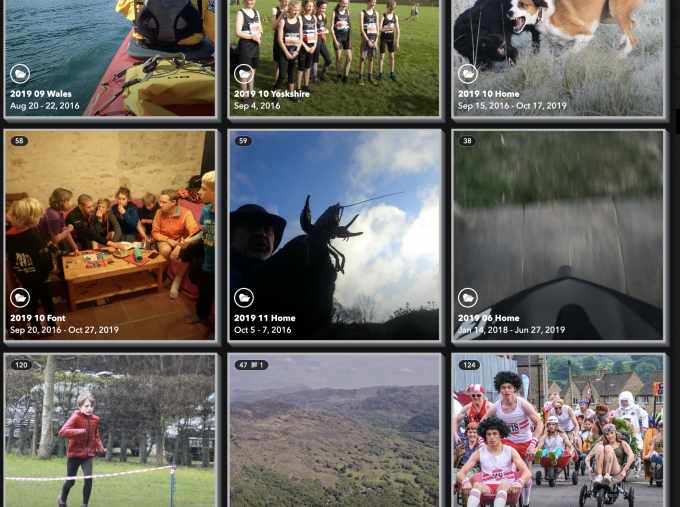 There is also a 'Calendar' option which gives a nice user interface based on a standard calendar view with a thumbnail photo shown for every day that you took a photo. This is kind of nice if you can't remember whether you took the photo on your camera and have uploaded to your computer, or one of your devices. It also gives a nice 'pot-pourri' approach to browsing your collection where you can just dip in at random. It does rely on each photo being correctly date-tagged which is an issue for much of my older collection.

'Map' is another option. Click it and you are presented with a zoomable map of the world with thumbnails pinned to different locations. Each pin has a number to indicate the number of photos in that area. Zoom in and one pin becomes many in a popular are, say where you live. It's another great way to find stuff, but again has the downside that anything taken with a device with no GPS seems to be fairly random in where it assumes you are.

Which brings me on to 'People'. This is an altogether different categorisation and requires some work to get it up and running. Obviously the software has no idea who any of the people in your photos are so it needs some input from you to get it started. It finds groups of similar looking faces and asks you to allocate a name. Once that's done, it then finds others similar to it and asks for confirmation. It does take a while for a large collection, but it's fantastic for finding people you know.

Lastly there is an 'Albums' category, but I've yet to create any so can't comment.

So far we've only talked about managing the photos. The software also includes some pretty good editing tools. Select an image and open the Edit pane. This is then subdivided into Histogram which shows you the colour spread of your image, Presets which give you a selection of pre-defined filters which you can apply, Tone which gives you slider control over exposure, contrast, shadows, colours etc, White Balance, and Sharpen & Noise. Effectively there is a massive amount of post processing available. If you find that there's a set of adjustments that you are making regularly you can create and name our own preset. It is possible to select multiple images at once and apply a preset. There is also a rotate tool, cropping tool, red eye removal, and an option to compare before and after edits. You can also tag people's faces in the photos. 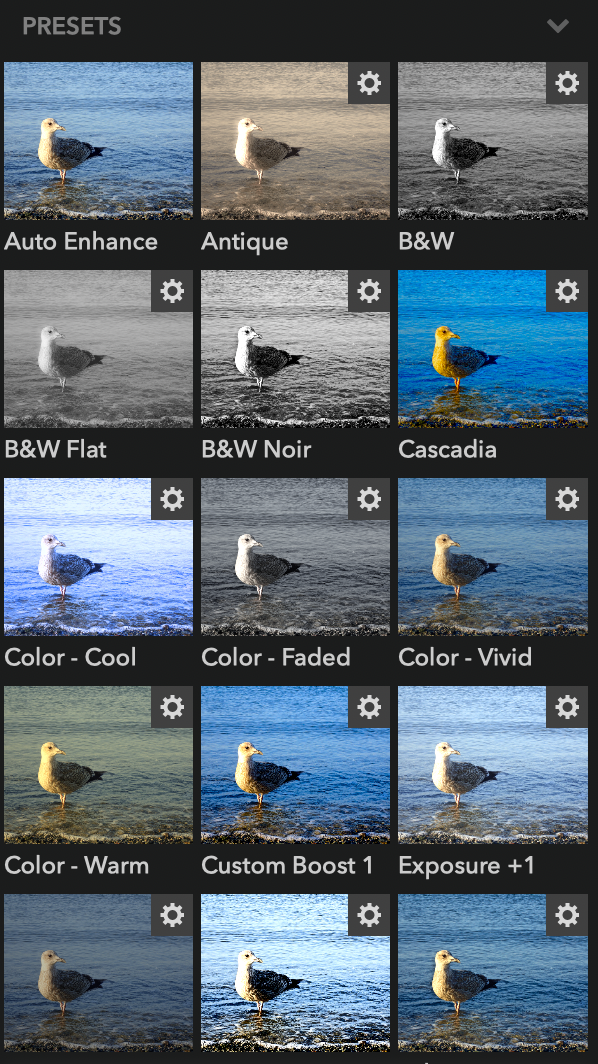 Once you have done your post processing and have the images just as you'd like them you'll probably want, at some point, to export them. Select your images, click the 'share' icon and you can do a number of things. Email them. Send as a text message. Air Drop (Mac only). Upload to Flickr (you need a separate account). Export as an image. Export (multiple images) as a video. Print. Set as desktop wallpaper. Each of these options has its own set of sub options. I won't go into them in detail here, suffice to say that it's a pretty comprehensive export menu.

As well as tagging faces, it's also possible to assign a place on the map to a photo, assign stars (up to 5), flags and labels. All these can be done to multiple images so for example, you can assign a whole folder of images taken in your home, to be in your home village on the map. 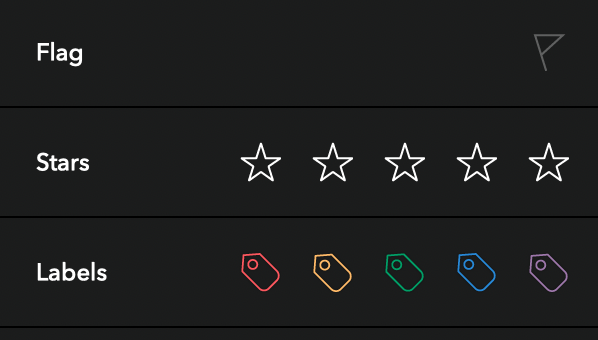 It's hard to describe how happy I am with this software. Picasa had a few eat features that this lacks (collage creation being the main one, an image straightening tool, the ability to upload directly to Facebook, the ability to filter subjects based on colour, flowers and other common objects, but in other ways it is really leagues ahead). It's incredibly powerful, pretty intuitive, and has so much functionality I don't think I've discovered all of it yet! It goes without saying that it runs on a PC as well as OS.

The free version gives you a licence for up to 25,000 photos across three devices. I'm on the Premium at $8.33 a month which gives 5 devices and 100,000 photos. The Max option is $20.83 per month and has unlimited photos. The two paid options also include the ability to edit RAW images. There's actually a 4th option which is available if you buy some Seagate hard drives which is free for the first year and $50 a year thereafter and gives 4 devices and 100,000 images.  You may be happy with the free version, but if you're anything like me then you'll be more than happy paying what amounts to not a whole lot of money for a quality piece of software. Obviously support is also provided. There is currently a competition on to win a bundle including a paid licence and a Seagate hard drive.

Check it out here. 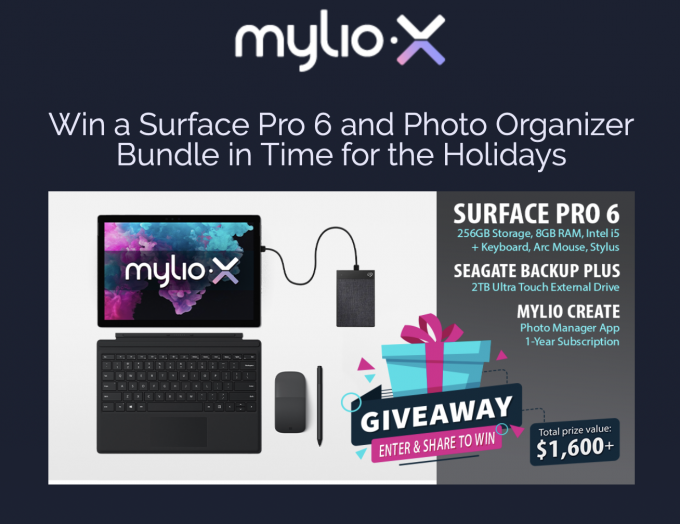