Many years ago I was in Barcelona for a few days and we decided to take a trip up to Montserrat as it's only a few minutes away by train. We were on a cycle-touring trip at the time so didn't really have our climbing heads on, but Montserrat has stuck in my mind ever since. It's a really quite amazing place. A massive tumbling arrangement of conglomerate lumps, bumps and towers. For any readers who don't know, conglomerate is a rock type which basically consists of pebbles held together by natural cement. It's fairly unusual, and makes for a unique climbing experience, the pebbles, which come in all shapes and sizes (some are actually rocks!) forming the hand and foot holds. As a result there are virtually no cracks or other natural features, so the routes tend to be bolted. Montserrat, as well as being home to a large range of climbing, hosts a very important Spanish monastic community, the individual monestaries perched on top of the towers, with access between them by steps and bridges. It's also home a an awful lot of cats!

This guide covers the areas of Sant Benet and Gorros.

The front cover is disappointing. Most of the impressive tower that is featured is in deep shadow, and the single climber is barely discernible. Type 'Montserrat' into Google and check out the images online and you will see just how an impressive area it is. Why the authors didn't simply put a photo of the whole area on the cover I don't know. Still, you shouldn't judge a book by its cover.

It is quite probably indicative of the small number of foreigners who traditionally visit the area, that the entire guidebook is in Spanish, but it's a shame that they didn't take the opportunity of a new guide to reach out to other climbing communities and encourage them to come and visit. Rockfax have proven that a couple of pages in a few key languages does wonders for opening up a new market (and presumably have reaped the financial rewards for doing so) - the number of foreigners sporting Rockfax guides at crags in places like Mallorca and Sardinia serve as proof. The photos inside the book are a little better than the cover shot, but are still lacking a punch. The topos on the other hand are very well produced and very detailed. I particularly like the detailed timings for approach, route and descent. I'd have no qualms about heading to Montserrat with this as my only guide despite being a non Spanish speaker... 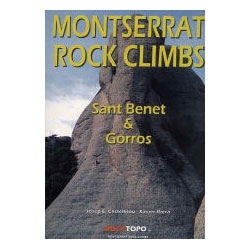 Published by Rock Topo in 2009