Some time in the dim and distant past I remember tackling what was a petty serious Via Ferrata in the Italian Dolomites. It was a rest day activity on a proper old-school climbing trip. I remember it as around 1,000 feet high, with plenty of vertical sections scattered with rusting rungs and a few frayed cables. As we topped out a huge thunder storm started and we opted for an 8 hour walk off the back of the mountain rather than risk descending down a wet, slippery lightning conductor. It was one of my first epic days in the mountains. Of course this was long before the advent of specialist kit to tackle Via Ferratas. We either soloed, or when it got particularly scary, clipped a static sling to the cable with a pear shaped karabiner. We'd done our (then) SPSA training and knew the dangers of falling even short distances onto static slings, but it felt a whole lot safer than falling 1,000 feet to the scree slopes below. If you're not familiar with the danger of falling onto a static sling then have a read of this - https://www.thebmc.co.uk/tech-skills-via-ferrata-equipment (in fact it's a whole article on Via Ferratas). 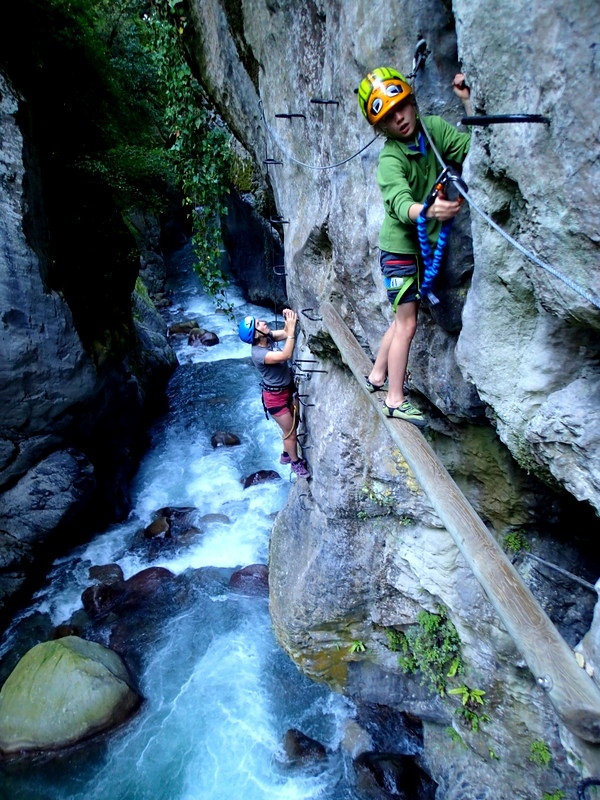 So shortly after our epic day in Italy I became aware of the fact that the likes of Petzl were making specialist lanyards for tackling the old military routes. Essentially they consist of two short slings, each with a large quick-locking karabiner on the end, both connected at the other end to your harness. Most Via Ferratas have a continuous length of cable running from start to finish. To stop this cable looping away from the actual route it's connected to the rock at intervals. The karabiners are both clipped to the cable and slide along as you move up the route. Get to a fixing point and simply move the Karabiners over one by one, always keeping yourself attached at any given point. The main thing that differentiates them from just using a couple of static slings is the fact that they are designed to absorb the impact of a fall. Different models use different methods - some have built in 'screamers' where folded webbing unfolds under load as the stitching holding the folds comes un-done, where others have a kind of belay-like friction action with a length of rope passing through a metal device. Essentially they allow you to take a dynamic fall as oppose to a static one, protecting our back and kidneys, and making the whole activity a lot more safe. As a result there are now a plethora of different models available on the market. I was after a lightweight one for my kids to use so after a little research opted for the Petzl SCORPIO VERTIGO. 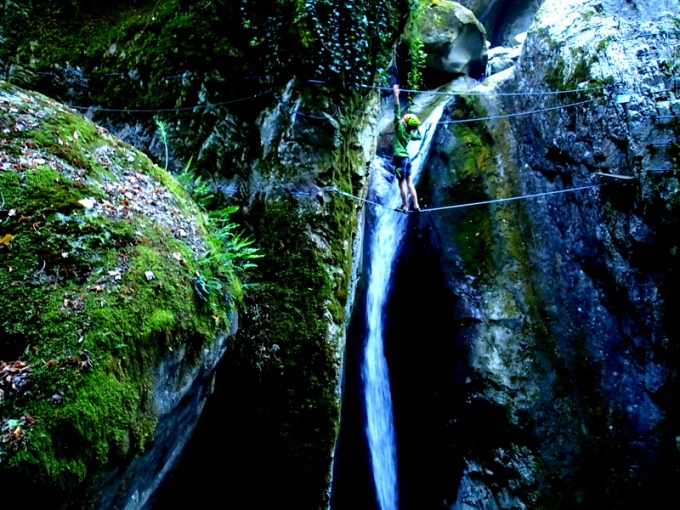 First thing you'll notice on the weight saving front is the wire gate Karabiners. As with most locking 'biners it takes a while to get used to them, but once you do they are easy enough to operate. The two lanyards each consist of a tubular sling outer sleeve (the load bearing bit) and an elasticated inner core. This means that unlike some other models the lanyards automatically stretch and retract depending on where you need them. When you are not using them for example, and have them clipped to your harness gear loops, they retract nicely and don't threaten to trip you up. Each arm has a rubber bit on the end to hold the Karabiner tight and to stop it rotating. The other end of each arm is stitched to a metal O-ring, which is also stitched to what Petzl call a 'progressive tearing energy absorber'. This is a folded length of load bearing tape, that is stitched together into a solid piece. When loaded, the stitching breaks, piece by piece, literally letting you down gently. It is stored inside a zipped sleeve so that you can inspect it to make sure it's in working order. This sleeve is connected to the harness via a twisted loop of tape which can be attached to the belay loop of your harness with a girth hitch. There's also a third connector on the O-ring which allows you to add your own Karabiner / sling combination so that you can create your own resting connector, or for using on a Tyrolean traverse. 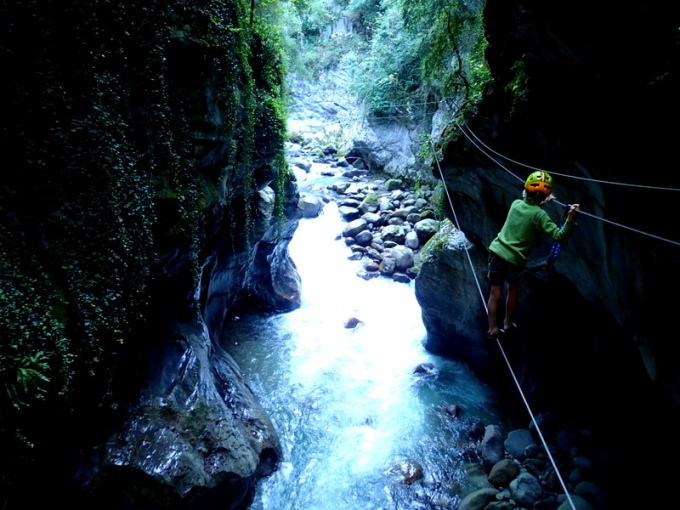 My lad found the Karabiners easy to use, with wide opening apertures making clipping easy. The whole thing, Karabiners included, weighs just 500g, so he didn't complain of it being heavy at all. The lanyards themselves work really well with their retractable nature, rarely, if ever, getting in the way. Obviously he's not fallen on it so can't comment on the comfort / discomfort of a slip (it goes without saying that these devices are one-use-only and need to be retired after a fall where the some or all of the stitching has come undone). On our trip to the South of France this summer we had four different sets and this was definitely the favourite.

RRP at £82, but available for substantially less than that if you shop around online. Well worth the money.
One word of advice before you buy all the kit and head out to try it, many Via Ferratas have height limits for kids. We have had to use toms guerrilla tactics and approach them before or after opening hours as our kids are perfectly able, but aren't allowed. This does have the added benefit of avoiding the crowds.