59.I've had a couple of Magicshine lights in the past (MJ880 | MJ886 Headtorch)so had high expectations of this one too. Whereas the previous ones have been real work-horse models to illuminate a wooded mountain bike trail on a moonless night, I was after something a little more lightweight to use on the roads. I had a few requirements: I was after something that would charge from a USB source, and something that could easily be transferred from one bike to another. USB is important to me as I've been known to do some endurance rides and I needed something that I could charge on the go, plus I like th concept of recharging easily after use without having to remove batteries. My wife also rides a road bike, but as we have young kids we are virtually never on the road at night together so a light that can be swapped from one bike to another made a lot more economical sense than having two.

It's small, light and sleek. Build quality is good, a mix of aluminium, plastic and glass. It's a reverse wedge shape, the wider frotn end housing two LED bulbs, about 11cm in length. On top is a single orange rubber button about the size of a fingernail, and also an OLED screen of a similar size. The screen gives a variety of information whilst the unit is switched on, more of which I will describe later. There are also two very small orange plastic windows on the sides, allowing light from the main bulb housing to illuminate these side-lights. There's a satisfyingly firm rubberised flap on the back end to allow connection to a micro USB power cable. On the underside is a kind of bayonet fitting similar to that used by camera flashes, for fixing to the mount on your bike.

It's bright, there's no doubt about that. 600lumens was what had been recommended to me as a minimum brightness for proper safe road riding and I'd agree. I'm happy on the road with it, but would not use it on my mountain bike in the woods. There are two bulbs, one for distance, and one for close up, which has a wide angle to illuminate to the sides as well. I have no complaints.

OLED Display. This is the real selling point of the light. Magicshine claim that it is the first of its kind. A bold claim, but not one that I will refute in this review. Essentially there are three modes the light: High, Low and Flash. You cycle between these by holding the orange button for half a second or so. Within the high and low beam settings there are four sub settings: 100%, 75%, 50% and 25%. When you turn the light on there are a number of indicators on the display. In the top left is an icon which lets you know if you are on High (full circle), Low (empty circle) and flashing (triangle). Not really sure why you need an icon to tell you it is flashing, but there we are. Immediately right of the icon is a series of squares, 5 of them, indicating the amount of battery left to the nearest 20% (100%, 80%, 60%, 40% and 20%). As you turn the thing on there is also a number below the above indicators, telling you the actual percentage of battery left for the given setting. After 6 seconds this is replaced with an actual time in minutes and seconds. The time indicator is by far the most useful bit of information, giving you a digestible figure for the amount of time you have left before the battery runs out on that given setting. In general I like the whole setup, however I have one really major gripe, and that is that there is no way of knowing at a glance which of the 4 sub settings your light is on, yet there are two ways to tell how much battery there is left. Perhaps the manufacturers are assuming that you inherently know which setting you are on by the amount of light being emitted, but I have found in practice that the only way of knowing is to scroll through the settings until you get to the change from the lowest to the brightest, at which point you know where you are, and then work down from there. I'd also point out that the reality of the time left so far has been a little wayward, but so far, only in a positive way - i. at the start of a 45 minute ride the light said it had an hour and twenty five minutes left on the highest setting, but forty minutes later it still had an hour and twelve minutes left n the same setting. 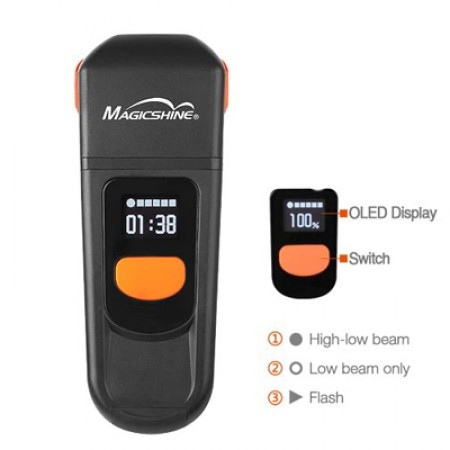 The mounting clip is straightforward to fit, and once fitted, very easy to attach and detach the light. It comes with three fittings designed for handlebars from 20-32.8mm.

I guess it goes without saying that the unit is rainproof. I wouldn't want to sumberge it in water as there's a micro USB socket in the rear which is only protected by a rubber flap, but it will certainly keep off any rain and splash.

Another feature that I would like to see on a light like this is the ability to quickly dip it either physically or to a lower setting when there are oncoming cars / bikes or pedestrians, exactly as you would do in a car. Furthermore I have also taken to clipping a cheap LED light to the handlebars and leaving it on flashing mode whilst I use the main light for illumination working on the principle that flashing is better for being seen but solid is better for seeing with I'd have though tit would be a simple update to include a mode where you can do both from within the same unit?

It takes around 5 hours to charge from a USB source which is fine by me. Sure there are fast chargers out there which will charge AA batteries in a fraction of that time, but I can't think of many times when I will need to charge it any quicker than 5 hours. Though this does mean that you have to keep it topped up ready for the next ride.

It's light, sleek, rechargeable, and retails at £94.98, though it is currently available for £59.99 on the Magicshine website which is an absolute bargain. Five stars from me and a great Christmas present.