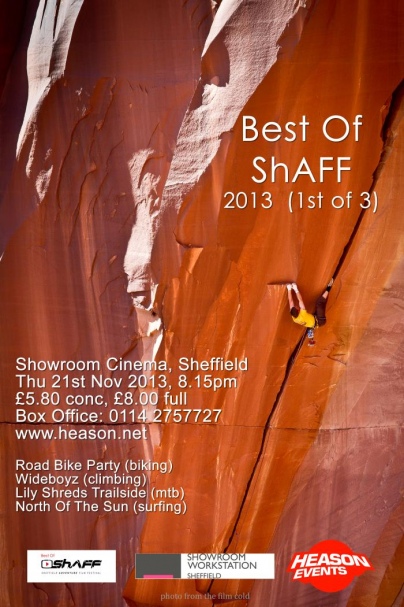 Winner of 2013 Sheffield Adventure Film Festival Best Short Film (Bronze).
UK trials bike legend Martyn Ashton takes the £10k carbon road bike, used by Team Sky's Bradley Wiggins to win the Tour de France, for a ride with a difference. Some of the toughest stunts you'll ever see pulled on a carbon road bike and amazingly only one puncture during filming.

Wideboyz (48mins)
Winner of Joint Winner of the 2013 Sheffield Adventure Film Festival Best Climbing Film Award
It's like ultimate fighting with a rock. The world of offwidth crack climbing is a strange sub-culture rumoured to be dominated by knuckle-dragging, bar-brawling dirt-bags! The climbing is tough, painful and bloody and there are hardly any routes in the UK. Undeterred, two British climbers, Pete Whittaker and Tom Randall, complete a brutal two-year training regime (mostly spent hanging upside down in their Sheffield basement) before embarking on an audacious tour of the USA and a first ascent of the world's hardest off-width - Century Crack.

North Of The Sun (46mins)
Winner of 2013 Sheffield Adventure Film Festival Grand Prize for Best Film and Silver Medalist in Best Spirit of Adventure Film.
Wavedreamer called it: "The most unlikely, best surf film ever". Two Norwegian friends have a crazy idea about building a beach hut north of the arctic circle and spending the winter living off flotsam and jetsam. Extreme beach-combing, stunning cinematography and a cabin Bilbo Baggins would be proud to call home.

All I Can – Imagination (5mins)