A Warm Welcome On A Cold Night

I was driving home after a meeting yesterday. It was getting dark and I spotted a guy up ahead with a large rucksack on heading into a particularly dangerous section of woods (dangerous as in narrow roads, high walls, and low light as opposed to bandits or highwaymen!). I stopped to ask where he was headed and was a little surprised at his answer: Italy! He refused the lift as he is walking there to raise money for Alzheimer Scotland. I directed him onto a nearby footpath and then felt bad for not having offered him some hospitality when he reached Grindleford.

An hour later I popped into the shop and he came up in conversation. He'd been in to buy some veg and had been directed to a spot on the outskirts of the village to camp for the night. So we put together a few bits and pieces that we figured he'd like (beer and cake mostly!) and went to look for him. Of course he'd popped into the Sir William, our local, to get warm before settling down for the night (it was cold!). In there he'd had the good fortune to get chatting to Jamie (runs Critchlows butchers in Bakewell) and Max, who'd introduced him to the new landlord, Terry. Between them they shouted him a room and a meal for the night. We arrived with cakes (including a rather nice cup cake donated by Maddie), a large chocolate bar from the village shop, and some good cheer. Spent an hour or so with Peter who has an incredible story to tell and is slowly, but surely making his way to Rome. He said that in the 6 weeks he's been on the road since Edinburgh last night was the highlight of his trip. 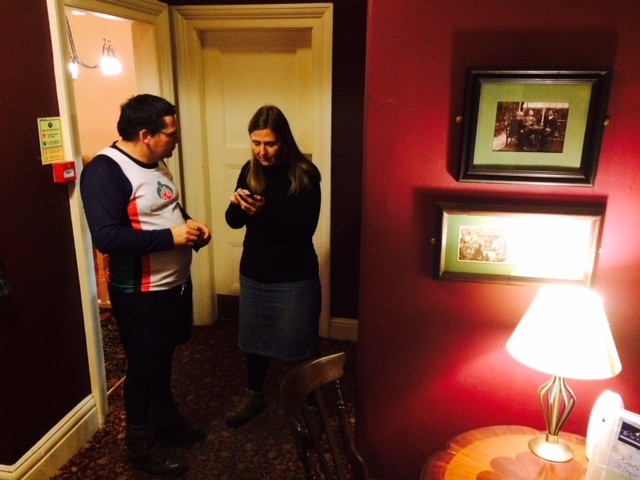 Before leaving last night I asked him whether he would be willing to pop into the village school to talk to the kids about his journey. He said that 9am was a little late for him to start, but agreed to make an exception to his daily routine (I suspect the thought of an extra hour in a hotel bed must have also been on his mind!). Here's a Blog from the school.

We also managed to grab him for a quick interview in the pub last night which will go out on High Peak Radio soon.

Check out his website. His planned route is on there. If he's coming your way I'd recommend getting in touch. He's even looking for folk to walk with him.