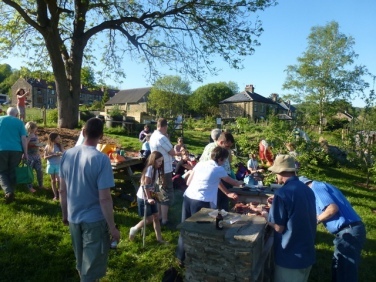 Back in 1999 we bought our first house. It was I Woodseats in Sheffield. We lived there for 8 years and had some good times. We got on with our neighbours, but had little in common with them and therefore little to do with them. We knew quite a few of the folk on our street, but the same thing applied. Even when we had a kid and started to meet other parents in the area things were still fairly low-key on the community front. Then we moved to Grindleford in the Peak District. It’s only a fifteen minute drive from our old place, a village of about 900 people. It’s hard to describe just how big a change it’s been. There are a multitude of lamp posts and telegraph poles in village and each one is always adorned with a patchwork of homemade posters and signs advertising a whole range of village groups, events and entertainment. We’ve just come off the back of a very hectic fortnight with the Jubilee celebrations, half term, and carnival week. There was something happening virtually every day during those two weeks, and it was all very well attended. There are key individuals who are responsible for much of what goes on, but that’s always the case. The team of people who work in the background volunteering, making cakes, selling teas, putting up and taking down stalls and marquees – is much bigger and all very good humoured. I actually organised one of the events during carnival week. It was a decathlon on sports day. It went really well, and nearly everybody said at some point how much they had enjoyed themselves, and most gave thanks. I wasn’t paid, but those words were plenty enough to make me start thinking about doing it again next year. If a job is a thankless one it’s harder to do again (and again and again). I hope that the same spirit is alive in other villages around the country, and I would urge anybody living in larger towns or cities to at least try to try to emulate it (I’m sure it is there in plenty of places, but in my experience it’s definitely stronger in smaller communities).