Another Year, Another River Race

Another year, another river race. I try not to call it a raft race as that encourages people to think that the rive in question (the Derwent) is navigable by rafts made of oil drums and planks of wood. In reality it is too shallow in many parts and would be a very tedious affair, carrying the rafts over the shallows. The rules state inflatables are the craft of choice - but no inflatable canoes, they're far too professional! Single bladed paddles, maximum two to a boat (one per person). We actually bent the rules this year by ending up three to a boat, but we figured it was allowed as our third man had been alone in a boat (perfectly legal), which suffered a catastrophic rock incident, ripping the bow open and plunging him into the cold water! This year, for the first time, the weather was kind, which made for an altogether more pleasant experience - although it did feel a little less arduous as a result! There are no prizes, so no need to list winners (though Cate and Anton did look very stylish sitting side by side in their Argos Special craft). Strangely this year there were no inflatable creatures, but there were a number of inner tubes, at least one of which had to be abandoned. Claire at The Moon in Stoney was, as ever, wonderful, feeding and watering 30 or so of us to finish off a fine evening of fun. 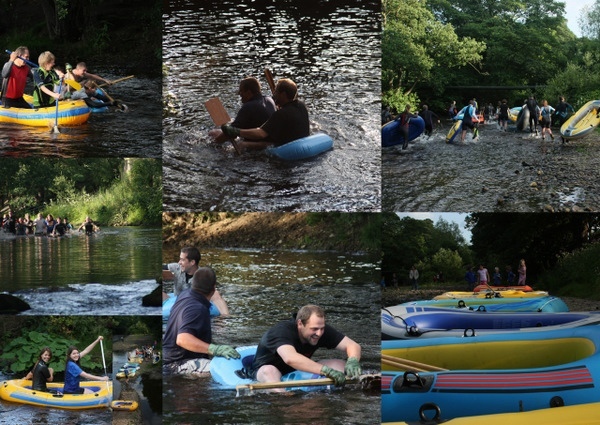