It's a bit of a taboo subject Wild Camping. It's not encouraged, there are no guidebooks, but people do it, and generally get away with it. We went to Snowdonia at the weekend for a family trip. The forecast was iffy and most people opted to stay in the Peak, but I put complete faith in the BBC weather forecast and it came up trumps. We had 4 days of perfect blue skies and warm April sun. Friday night we arrived at our destination - can't tell you where it was otherwise everybody will be up there. Realised we didn’t have any matches for the stove. Went to the kiosk in the car park to buy some and bumped into a ranger who gave me a bag of wind-proof ones. He then casually asked if we were going camping? I answered honestly and he said, go ahead, but just tuck yourselves out of site, don't leave a trace and strike camp early in the morning before the hoards arrive. That's exactly what we did. The evening was magical. Chilly, but clear, crisp and so incredibly quiet. woken at 7.30 as the sun hit the tent (which by the way is a very good wild camping tent as it's two tone grey and light green make it virtually invisible - see review) and encouraged us all out onto the beach where we watched the cliffs around the lake light up. A few minutes later 4 figures came into view - that's early for walkers I thought. It was my folks who live nearby, with a couple of friends who were visiting, arriving with the ingredients for bacon sandwiches! No sooner had we finished the sandwiches and started to pack up the tents than we noticed a couple of other people packing up a tent on a knoll a few hundred metres higher than us. It made me wonder how many people are wild camping on a nice sunny weekend in Wales / England / Scotland? Heading back down to the car and driving around over the rest of the weekend was a bit of an eye opener. Some of the camp sites literally resembled music festivals they were that busy. It was hard not to feel just a little bit smug. If you haven't tried it, I'd urge you to do so. Choose somewhere where people won't see you and don’t leave a trace, definitely don't have a fire. 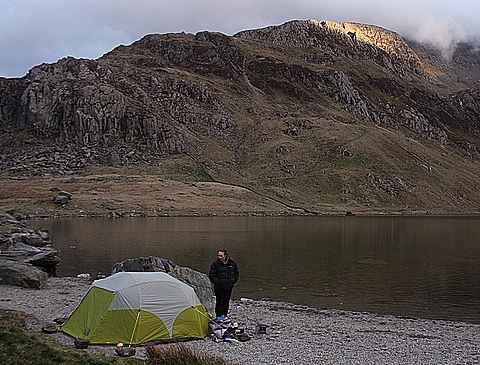