Without a doubt one of the best things my parents did for me as a young kid was to teach me to swim. I didn't get my first bike until 11 (failed my cycling proficiency test two weeks after getting it, but quickly mastered the art of front wheelies - I forget the name of a front wheelie), wasn’t much of a football player, and didn't really get ensconced into the world of climbing until I left home, but swimming I did a lot of. Countless hours were spent driving my brother and I to and from the two local pools for a multitude of badges and galas (I remember well how to turn a pair of pyjama bottoms into a temporary float), but the biggest treat of all was being old enough and responsible enough to trot the hundred yards through the woods fro our house to our local swimming spot, a huge pool in the river Glaslyn in Snowdonia. During hot summers we'd jump of the school bus, run in, change, and spend the next three hours down by the river jumping out of trees, cycling off the bank and generally larking about. That pool was one of dozens of spots in the local area. We were blessed with them. There were always a few mates who'd be game to join us, but I could never get my head around why so few people were at these places.

20 or so years on and it's much the same story. Based in the Peak District the swim spots are less numerous, but they are there. I was down at Calver Bridge on Saturday and Sunday over the weekend with mates. The water is still clenchingly cold, but incredibly refreshing at the same time. Cars hooted us regularly as we sat on the parapet in between jumps, but none stopped to join us despite the sweltering weather. Perhaps air conditioning is to blame - ours is broken so even a short journey in a car in such temperatures leaves one sweaty and desperate for a cooling off, but I fear the problem is rooted more deeply. The friend I was out with last night had tried to persuade another mutual friend to come. He'd turned us down with the argument that a mate of his had put his arm in a Peak District river and it had come out covered in 'wormy things'. Rubbish. I'm sure there are a few unsavouries floating around in the Peak waters, but I reckon it's a mix of lethargy, fear of the unknown, and air conditioning that keeps people away.

I regularly bemoan the loss of our lidos around the country, citing a trip to Southern Spain many years ago with jealousy. Down there every single village has a free communal, open-air pool where the entire village congregates every summers afternoon to see out the heat of the day. Sheffield is ringed with reservoirs and rivers, but most have signs up declaring that they are unfit for swimming. One of the most popular spots was recently drained, presumably as it was more effort to keep open than it was to allow it to sit, un-managed, but well-used. Why can't the local council put a bit of time, effort and money into transforming some of these reservoirs and other venues into public swimming spots, encouraging everyone to engage in a bit of old fashioned fun and exercise?

For any lovers of wild swimming out there make sure you check out this website, and buy the associated books. The first I have on my shelf and treasure. The second (coast) is on it's way to me and I'm very much looking forward to reading it when it arrives. I've even posted a few of my favourite locations on their interactive map and would urge others to do the same :-) 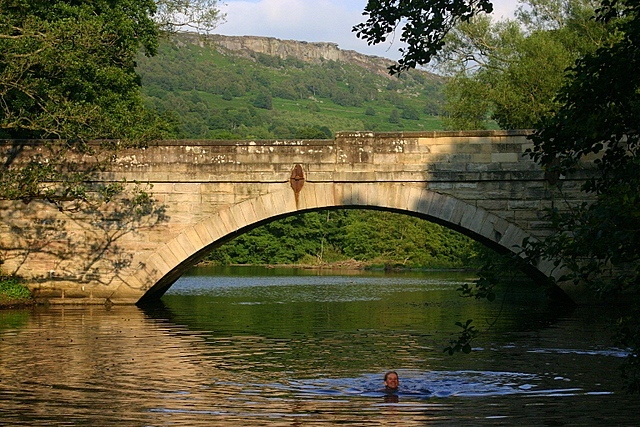 The bridge at Calver (over the river Derwent).