A while back I Blogged about Deep Water Soloing (or DWS). Bacl then I was sitting in a rainy office dreaming about it. Well we just got back from a pretty awesome 10 days actually doing it in Mallorca. We went last September and had such a good time went again this one. A shame we missed some of the best weather the UK has had to offer all summer whilst there, and an even bigger shame that it rained a fair bit whilst we were there! Still, I managed to climb on 10 days out of 10! I tried to take a couple of rest days, but got sucked in to messing about on 'easy traverses' which proved to be less easy than we thought!

One of those 'rest days' we swam out to the mega-arch made famous by Chris Sharma in last year's 'Es Pontas' chapter of Dosage. It's about a 50m swim and it was a choppy sea so it felt fairly adventurous. We'd gone out to have a play on the traverse around the left hand leg of the arch, a 5+ described in the guidebook that turned out to be more like 6b+ and pretty pumpy in places! Chris's route looks truly awe inspiring, and the level of commitment necessary to climb the thing must have been monumental. I'd be interested to know if he scared himself silly as I did by climbing the stone totem pole on the cliff-top overlooking the arch. It's essentially about 10 huge table sized slabs of limestone planed smooth on top and bottom, stacked on top of each other to make a giant climbing frame about 25 feet high. Stood on top for a photo I did a bit of a wobble to scare a few onlookers and was more than a little surprised when the wobble didn't stop and the thing carried on swaying! I waited a while for it to stop and very gingerly climbed down!

We even managed a bit of new routing action this time around. Mallorca is pretty much one big hulk of limestone with a million holds ergonomically designed for climbers! Although plenty of crags have been developed it is still very much in its infancy with potential new lines all over the place. Three trips to Cala Mitjana eventually saw a first ascent of 'Balsa Boys', a classic 7a+ tackling some impressively steep terrain out the back of a cave on perfectly spaced monster buckets.

One bonus to the trip was meeting Team America who were staying with a friend in a nearby villa. Cedar Wright, Alex Honnold and Matt Segal were all there with a bunch of others, absolutely loving the place. What impressed me most was Cedar's blog postings. I seem to manage to post once a week if I am lucky, he was posting pressty regularly out there, but was managing to edit some pretty decent quality videos for uploading at the same time. Check out Vertical Carnival.

And on top of all that it seems I'm actually reasonably fit after 10 days of steep jug-pulling :-). Hopefully more on that in another blog posting soon enough.

Here's a few photos of the trip. 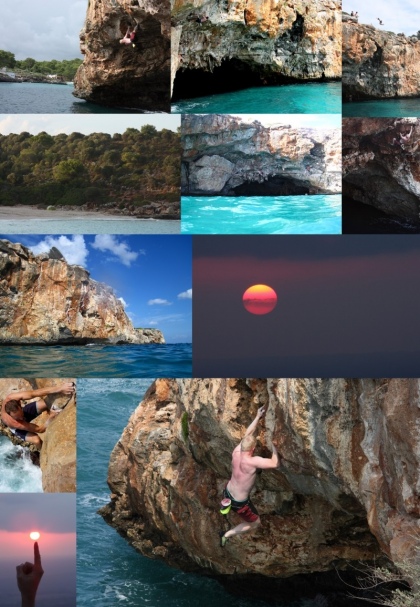