A friend who shall remain nameless once came to visit. She arrived into Manchester, rushed onto the slow train to Grindleford, sat down with a big sigh, and politely asked the conductor for an Emergency Latte. If you've ever travelled on the said slow train you'll appreciate the irony of this. The train can barely make it between Northern England's two major cities let alone muster a buffet carriage! So Network Rail are proposing some changes to the Hope Valley railway to increase capacity between Sheffield and Manchester. A good thing on the face of it, but having done a little digging it would appear that providing capacity everywhere it is needed is not top of their agenda. The main issue lies in the fact that there is only a single line for most of the journey which limits the number of trains that can travel along it, especially when you mix in slow trains servicing the many villages and towns along the route, freight trains, and express trains going directly from city to city with minimal stopping along the way. The proposal is for a passing or waiting line to be installed on the outskirts of Grindleford to allow one train to wait whilst another passes.

There appear to be a number of problems with this:

1. The disruption envisaged and put forward by NW is significant and will result in a MASSIVE (we're talking 5 times the size of the public car park at Surprise View) temporary car park and site buildings being installed for the workforce.
2. The destruction of mature oak woodland. NW have said that this will be done in a sympathetic way, meaning that they will cut down old trees, do the work, and then plant new ones. Not sure how that preserves the ancient woodland habitat.
3. For me though, the biggest hurdle is that nowhere will NW commit to any proposals for how the changes will benefit those living along the line in the Hope Valley. When quizzed at a recent public consultation over increasing the number of trains stopping at the Hope Valley stops, or even designating one of the stops actually within the valley as a stop on the express trains (currently this stop is in Chinley which lies on the Western side of Winnat's Pass, so anybody living in the valley is literally stranded should snow fall on high ground), the response was hollow and vague, passing this on to Northern Rail who will be responsible for the actual timetabling. It's a simple concept for them all to understand: if you want to make these changes the local residents need assurances that they are going to reap the benefits. The fact that they were so evasive strikes me that a) they don't get the concept, and more worryingly that b) there is no real plan to benefit the local villages.
4. They explained at the consultation that they had already listened to the feedback from people living and working in the Hope Valley, and that they had toned down their plans for disruption of the woods. I really don't see why they needed opposition in order to make these changes. The initial plan should have been as sensitive as possible.

My suggestions to Network Rail and Northern Rail:

1. Work together to deliver a more integrated proposal to us.
2. Make some cast iron assurances that the local villages will be better served as a result of the changes.
3. Put on (and publicise) a dedicated carriage (or at least half a carriage) for bikes and cyclists at the weekend to complement the millions that are being spent to develop the Peak District cycling networks. Ride the wave of good publicity that cycling is bringing about at the moment and for very little cost, earn a lot of support.

Do that and you might get my support, and I'd hazard that a few others may be swayed too. 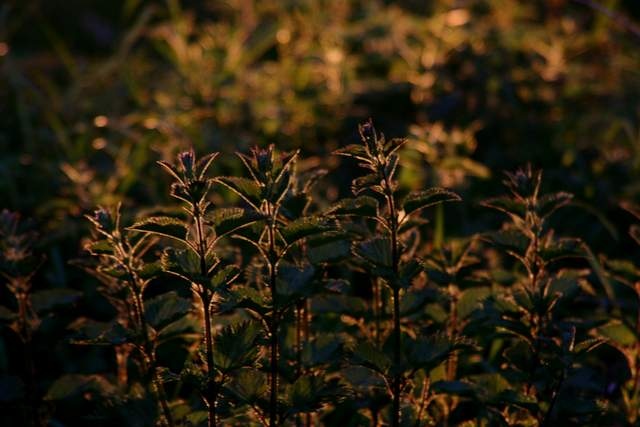 Nettles at sunset in the mature Oak woodlands by Longshaw Estate.

The National Trust, who manage Longshaw, are opposed to the plans as they stand. There is plenty of information on the plans available on the Grineldford website..