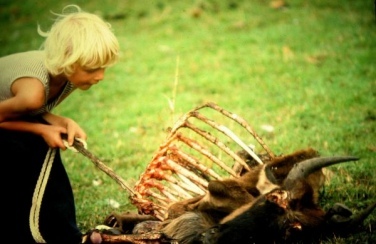 I was watching a film last night on some folk climbing Mount Kenya. Before embarking up the mountain they did a bit of a tour around the plains below to look at how important the water from the mountain was to the country. The footage of them visiting the Samburu tribe gave me a bit of a jolt. In actual fact it was the footage of some very thorny bushes that gave me the jolt. When I was a kid my parents took me and my brother travelling to some pretty far flung places. Kenya was one of them. I’m not sure of the exact year we went there, but I think I was about 6. I have some very strong memories from the place: crabs scuttling across the beach at Mombasa, waking up on a sleeper train to look out the window and see giraffes walking by, stopping our truck to look at a giant puff adder crossing the road, and plenty more. However I wouldn’t have put a thorn bush down as one of them. Until last night. Simply seeing them on a screen more than thirty years later evoked such a strong memory and sense of itchy feet that I was taken aback. I’ve now got two kids of my own and we’ve held off travelling too far afield just yet for fear of them not really getting that much benefit compared with a (highly enjoyable) trip to France or Spain, Scotland or Wales. They are 3 and 6, and we were planning a trip to Thailand or Jordan before too long, but last night’s experience has made me realise that we probably ought to get a move on. Got to start saving those pennies!

Here's an album of a few photos from that trip thanks to my Dad who scanned in his old slides a while back.