When I was a kid I remember it was a common sight to see people by the road side with a big rucksack and piece of cardboard, thumb out, and looking friendly if not desperate. Hitching was also used by non-traveling folk, simply as a cheap means of getting from A to B. Today it's largely disappeared. Public transport costs have soared and the cost of owning a car is fairly prohibitive so the only reason I can see for this is scaremongering by our media convincing people that it's not safe to pick people up.

I hitched a lot as a student - mainly abroad, but also on occasion in this country. It's not only a useful and cheap way of getting around - my wife (then girlfriend) and I hitched 5,500 miles around Canada and Alaska and didn't pay a penny for public transport except for a ferry journey, in nearly 3 months! It's a fantastic way to meet people. I'd argue that the latter is even more important than the former. Our Canada trip for example was studded with some fantastic memory-making rides, people, invitations and stories. We camped and BBQ'd on a beach in Anne and Kirk's back garden on the shore of a lake, and babysat their two kids whilst they went out for an anniversary kayak; we hitched for 3 days with one of the board of directors at Microsoft who introduced us to Harry Chapin; we were picked up and given work by a couple running a dried flower arrangement farm, camped under a pear tree that kept dropping its fruit on our tent, and took a day off to work on a feed station for an Iron Man triathlon, that evening borrowing their car to drive into town and partake in a drunken darts tournament; we hitched with a lady wrestler, a drug dealer, and hundred other folk. It was a formative trip packed full of memories that you just can't buy. And they were thanks to hitch hiking.

Lately I've been musing that I'd really like to be on the other side of those memories, to be the one who picks up people traveling through my little bit of the world, and sees them through to the other side a little bit richer in experiences than had they simply driven or cycled through with a Lonely Planet and a bunch of clever phone Apps that offer all the knowledge without any of the emotion. Reversing the hitch hiking trend is not practical. When I do see somebody I always stop if there's room in the car, but it's inevitably local climbers or runners who I already know. So last night I signed up to Couch Surfing. Having just dissed clever phone apps this one does sound like it has some potential in that it basically let's people traveling through an area contact you to ask if it's practical for them to stay with you for a night or two. It remains to be seen how successful a substitute this is for what I'm after, but my fingers are crossed. 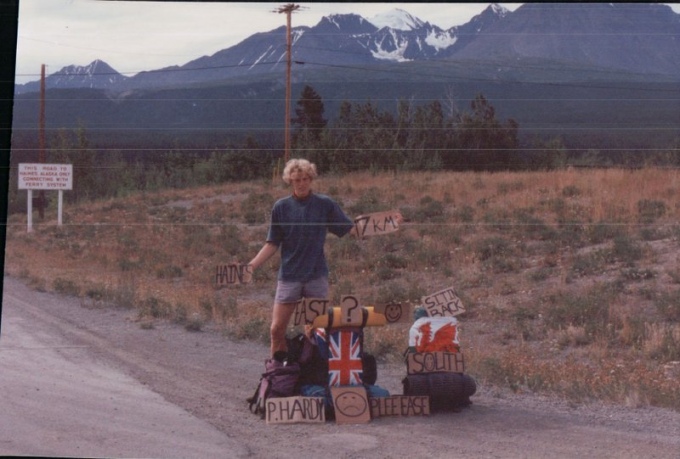