Is There Such A Thing As An Urban Fell Race?

It's a tricky distinction deciding what constitutes a fell run and when a fell run becomes a trail run. I grew up in Snowdonia where fell runs (and races) were literally up and down a mountain. I now live in the Peak District where the local club is the Dark Peak Fell Runners, but there's hardly a mountain in the whole national park that really merits the term 'fell'. Sure it's pretty lonely up on top of Kinder, and there are a few reasonably long descents, but these tend to be on well maintained paths and don't come anywhere close to the sort of height differentials experienced in Snowdonia, The Lakes or the Scottish Highlands. I'm not complaining - I love loving and running where I do, but I do miss the real hills, and I especially miss running down them (though not up them!).

Last weekend a mate organised a brand new race called the Trail Rush. It was billed as a 15 mile trail race and followed the 'Round Sheffield Walk'. Having also lived, and run, in Sheffield for a spell I was familiar with much of this route, though had never run it in its entirety, and definitely never raced it. I decided to run the thing as I wanted to support my mate, and I was also keen to have a bash at the circuit with the benefit of some proper signs (running it at pace without the race signs, and following the council-erected blue signs would be virtually impossible without getting lost a couple of times).  I'd tried to rally a few friends to take part, but had been met with a common response that they weren't into the idea of a road run. That's a shame because it's very much not a road run.

The course starts and finishes in the amazing Graves Park which overlooks the Peak District and means a leisurely downhill start, but an up-hill finish. True enough, it starts off on the tarmac, following a network of quiet residential roads for about a mile, before plunging into a pleasant shaded downhill on tracks very much like the 'fells' of the Peak District. Having started off in batches of 50 or so runners we had our own little mini-race going on, and it wasn't until we'd crossed up and over Bryncliffe Edge and into Endcliffe Park that we started to catch the slower runners from the group who'd set off 15 minutes before us. In Endcliffe Park we ran past stall holders erecting gazebos ahead of the final day of the Tramlines music festival and the locally-famous Folk Forest before beginning the thoroughly enjoyable climb up to Ringinglow. A short blast along the pavement past the Alpaca Farm brings the course to it's finest section, the descent down the Lymm Valley, where dappled shade and constantly changing terrain meant care was most certainly needed. Then came the sting in the tail - a series of brutally steep sections through the woods back up to Graves Park, mainly on rough-hewn steps, but with tired legs, as tricky as an ascent of Crib Goch! All in all it was a thoroughly enjoyable route. It doesn't quite go around the whole of Sheffield (there's another race that does that, but it's in the region of 40 miles I think), but it encircles the nicest bits of the city with some very pleasant running, and just under 2,000 feet of ascent / descent. 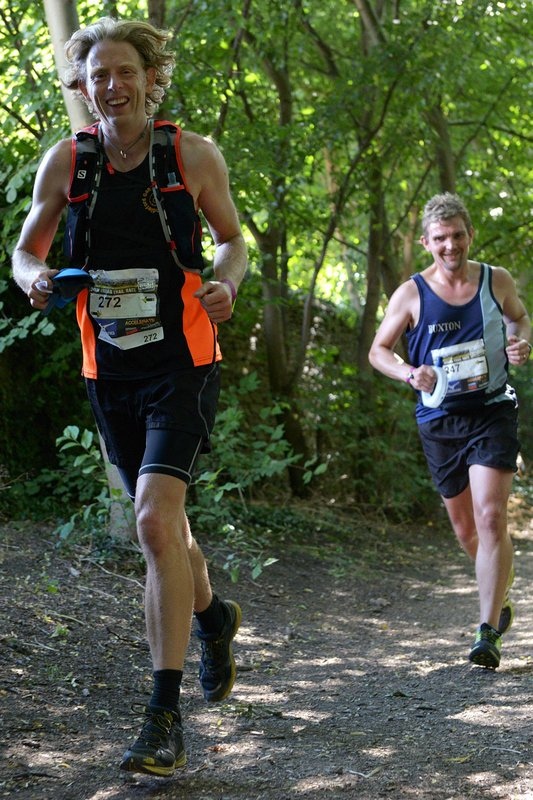 Maybe not a fell run, but a site more 'fell' than some of the races I've done in the Peak itself! For anybody interested in the water situation on the route, it was billed as a trail race and not a road race, and there was one water station at roughly half distance (Ringinglow). Much of the route was shaded which helped. The whole thing was run extremely smoothly with a crew of very friendly marshals and officials. I'll definitely be doing it next year and attempting to rally a few others to do so too!