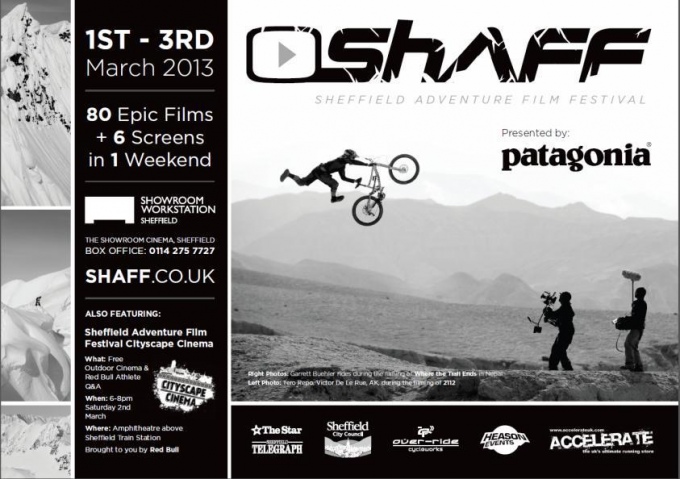 “Having seen the trailer for SHAFF and your brochure I am assuming that women do not have adventures?  You have no images of women in the brochure and about 2% in the trailer.  Who exactly are you trying to appeal to?  Certainly not me.”  Pip Mactaggart

Pip’s email dropped into my inbox the day before this year’s Sheffield Adventure Film Festival started.  I was frantically busy.  The event ‘organisation’ is basically me working part time with festival founder Matt Heason and an amazing team of volunteers.  Plus, it’s a bit of a bubble burster when you’ve spent all winter watching well over a hundred films and you’re working like a dog.  And I was really proud because we’d actually got more films featuring female athletes than ever before.

So I dashed off a reply listing my case for the defence: We’d held a Women’s Climbing Expert Night with 5 female climbers; I’d interviewed film-maker Jen Randall about her film ‘Push It’ for SportSister; I’d press released all our films with female athletes; two women runners were speaking at the festival; the trailer’s made 4 months in advance and film-makers don’t send high res images in time for the brochure; two of four our judges (Trail Running Editor Claire Maxted, and eight times British climbing champion, Lucy Creamer) are female; and we don’t control the film-makers or the sponsorship budgets.   In essence - don’t shoot the messenger.

We ended up having our most successful year ever with ticket sales up by nearly a third.  Job done as the festival PR.  But Pip’s email’s nagged away at me.  Are we honestly doing enough?  Yes, we had more films featuring female athletes but that was still only 10-15% of the total and only a handful starred women and several parents told us they’d have liked to have seen more girls featured in our Young Adventurers’ sessions.  What’s the answer? 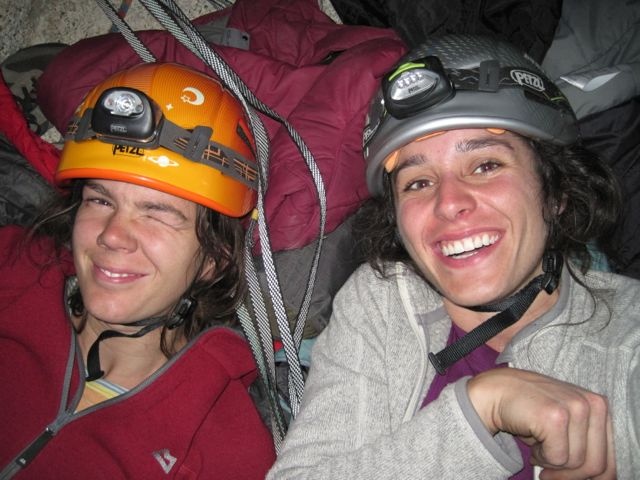 Jen Randall (pictured left), whose debut film ‘Push It’ focuses on the story of her and a friend climbing the 1000m El Capitan rock face, says:  “I don't think there's a simple answer really. There are certainly fewer female adventure filmmakers around, in the UK at least, so that's a starting point. I'm not sure why that is though”.  She says there are more female oriented films by female film-makers coming through - like surf film ‘First Love’ which featured at ShAFF.

Sometimes it does seem it’s a case of outright prejudice.  Jen told me:  “I was pretty stunned to be told last year by a dude-who-shall-not-be-named that as a female I would never find myself being invited to film on expeditions because a woman would upset the dynamic of a male team to the point of those men not knowing how to act...!”

A big limiting factor though appears to be women’s own attitudes.  British snowboarder Jules Pickering - the first woman to climb and board down the three highest mountains in Arctic circle, whose film ‘Taming the Bear’ charts the first descent of Alaska’s Mt Bear, told me:  “I honestly find it very difficult  to find other women to do these types of expeditions. There are some amazing women rocking it in the park, pipe and freeride competitions on skis and snowboards. But when it comes to camping in seriously cold temperatures to climb and ride a big mountain in an extremely remote environment, I struggle to find other girls wanting to do it.  As in ‘Taming The Bear’ I am often the only female.” 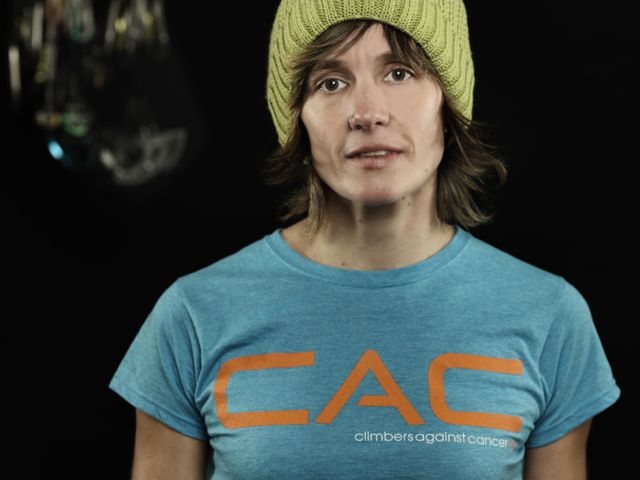 That chimed with an interview I’d done with Lucy Creamer (pictured right © Tim Glasby) ahead of our Women’s Climbing Night.  “As women generally we’re not as gung ho as men. I remember early on in my climbing going to the climbing wall and having sessions with people down there and obviously most were men and what I noticed was they’d just throw themselves at something and I’d just hold back even though I was one of the better climbers in the group I’d think ‘I won’t be able to do that’ and they’d wander off to the next one and I’d sneak a little try when noone was looking.  And I thought ‘What am I doing, they’ve tried and failed and nobody cared?’.   I kind of got over that but I definitely remember that at the start.  It’s why I really liked climbing with men – they just tried things, didn’t care how they looked or what people were thinking – they just had a go and it was quite a good lesson early on.”

Lucy believes the fear of failure is too often an attitude that’s instilled in girls from childhood.  She says, “You look at young kids together and it’s naturally assumed a boy can just have a go at something.  You’ll see adults say to boys ‘Go on, give it a go’ even if they don’t want to but with a girl adults are a lot more inclined to say ‘If you don’t want to, you don’t have to’.  It’s almost like girls are encouraged to not to try whereas boys are encouraged to try.  And if you grow up in a society like that men feel they can try things whereas women don’t feel so confident.” 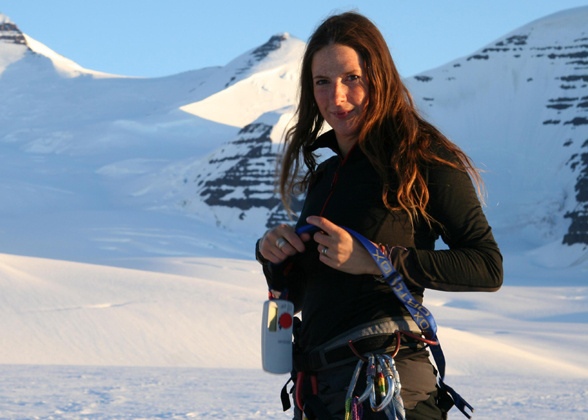 Jules also questions whether the sexualisation of women in adventure sports is a problem.  “A certain popular online adventure film website frequently features stuff that encourages the idea that women should be hot, blonde and in a bikini to make it in this genre. This stereotype is often placed in girls heads at a very young age. They are not exposed to strong women breaking the mould in an expedition environment.”

I have to confess I was really reluctant to watch ‘First Love’ having seen the press images of three lithe, blonde teenage surf chicks in their bikinis.  But I was blown away by this deep, considered, beautifully crafted film about the pressures of learning to compete at the highest levels which challenged all my own preconceptions.  Yet - hypocrite that I am - it didn’t stop me using the bikini shot on our website.

As with all sports, money is a big driver.  Jules says, “There's also less women's specific kit available. It's a vicious circle that if the women aren't out there doing it then brands don't want to put money into creating and marketing it and then there isn't the advertising or promotion of female role models to encourage or inspire women. I know Berghaus is seeing a rise in female clothing sales and is actively working to improve on what's out there for us. I'm sure other brands are doing the same but at the moment it still a small but importantly growing market.”

There are certainly some physical limitations.  Lucy’s fellow judge, sports writer Nik Cook (who’s also my other half) argues top female cyclists like Tracy Moseley in the blockbuster bike films like ‘Strength in Numbers’ are impressive but he says, "Run a men's World Cup winning downhill run side to side with a women's and, even with the helmet and all the padding, you'll be able to tell which is which. For filmmakers after the biggest and gnarliest tricks and jumps it's the guys who can physically deliver on the big screen.  That said, the welcome trend towards more creative story-telling and less extreme action means I hope we'll see more women in adventure films."

Jules wonders if the pressure to do what the boys are doing in the big budget, ‘action’ movies like last year’s ski/board blockbuster ‘Art of Flight’ is putting women off.  For her, the answer isn’t to try and compete.  “I feel our niche is to do it in only a way girls can. We want to get out there and show off our talents because we love to do it and its fun rather than a series of one upmanship, trying to kill ourselves with more and more extreme feats.  I’m not digging at the boys of course - more perhaps the way they are all too often portrayed.”

Jen says she understands what I mean about challenging my own preconceptions.  “I think we partly expect films about women doing sports to be basically an excuse to look at hot girls because that's has been the case in the past sometimes. What I think is changing is that story-driven films about female athletes are now appearing, like ‘First Love’. It took me more than a year to start filming ‘Push It’.  I knew I wanted to make a film about women climbing but didn't want it to be novel just because it was women instead of men.  Then I realised it would work if we just didn't make a big deal about it - it could be a story about people trying to do something hard for themselves, who happened to be female.  I think that's why it worked in the end, we just let the girls be themselves and get on with it.”

Jules, Jen and Lucy all agree that things are changing.  Lucy told me: “In climbing it’s just fantastic – there’s a real forward momentum”.  Jules says “There are gradually more women out there wanting to do it and will start appearing in more films. Bibi Pekarek has recently become the first woman to appear in a film by [big mountain snow-boarder] Jeremy Jones but filmmakers need to be careful of using women as a ‘token female’ - my running joke nickname in Alaska.”

Jen says she’s had a great response to her work and has specifically been invited to film on occasion because a female perspective can offer a different angle to the adrenaline-filled world of adventure sport films that have been made by guys for years and years.  But she’s also wary of tokenism.   “It's a fine line to tread - you don't want to make an adventure film about women just for the sake of it being about women, and you don't want to screen an adventure film by a women just because it was made by a woman.  The quality of the film and story need to be just as strong as the competition or what's the point?”  And though she’s realistic, she’s also optimistic:  “There are just fewer women out there filming and crushing but it’s changing and I think it's an area that is about to explode.”

I think the winds of change are blowing through the industry.  Listening to British bouldering champion Shauna Coxsey and World Paralympic Champion Fran Brown at our climbing night, the message they’re shouting is that women need to have a go, not be afraid of failure or embarrassment and just try harder.

My personal resolution is to take Jen’s message on board and push ourselves to look harder for more female film-makers and athletes.  My colleague, Festival Director Matt Heason says,  “A number of folk pointed out to me that there were no women featured in the two sessions of Young Adventurers films. This was’t deliberate, but I can’t honestly say that I was looking for a balanced programme. I was driven more by finding the best films that I thought kids would enjoy and be inspired by. That won’t happen again. I shall be searching harder for films featuring men and women, boys and girls as I really think that inspiring the young folk is the best way to make things change.”

For me talking about this article with my female fell-running films has fired us up to try and put together a short stills film up on the hills to try and capture the essence of why we run.  Jen’s film title sums it up: ‘Push It’.  (PS Pip - I hope this is a better answer to your question.)