I remember many years ago watching a young lad climbing at an indoor wall. His name was known to me as he was on the British youth team. He was being coached by his Dad who was being incredibly pushy, way beyond the point of it being any fun for the kid. Granted he was good at climbing, and I have no doubt that he was good in large part because his Dad had pushed him so hard, but when it takes the fun out of it then I really wonder whether it is all worth it. I have just read Andre Agassi’s biography ‘Open’. It’s a cracking read, well written. However he openly admits to hating the sport of tennis. Reading the book it’s easy to see why. It’s also easy to see why he was so good. His Dad sounds like an absolute monster of a parent. He took pushy parenting to new levels.

So I have kids of my own now. We have always encouraged them to climb (and run, bike, swim etc), but vowed to each other early on that we wouldn’t be pushy parents. An incident a few weekends ago has made me think about the whole issue, and to question where the line is between being pushy and not being pushy. We were in Wales at my folks house for the bank holiday weekend with some friends. The forecast was good, and we’d planned to head down to Tremadog to take Bryn, our eldest, on a proper multi-pitch climb for the first time. He’s done plenty of bouldering indoors and out, and done a few routes on the gritstone edges of Derbyshire, but never really any what I would call ‘proper’ climbing. Initially he wasn’t keen. His friends were around, everyone was playing in the garden, and like most young kids he was quite happy doing what he was doing and didn’t want to change it thank you very much. This is a common occurrence and I insisted, promising him that he would enjoy it. He duly came with us, but I was already feeling like I had pushed him, but as I said, this happens regularly, and as I am sure is the case with other kids, in one hundred percent of the cases where he’s had to do something different to what he was busy enjoying doing, he has switched to the new thing and loved it just as much (and sometimes more). So we arrived at Tremadog and found our chosen route – Christmas Curry – plastered with people. In fact nearly every route there had at least a couple of parties on it. The only route unadorned was Striptease, a butch VS 5a bridging corner with some overhanging bulges. By now he was well into the idea of doing a climb so we decided on a baptism by fire.

About 10 feet up the route he had a bit of a meltdown. He banged his shin, decided it was too hard, and cried. Whilst I was sympathetic to the bashed shin it was clearly a lot easier than he was making out and he was obviously having a bit of a wobble. Who wouldn’t with the route overhanging up above! My brother had lead the pitch and the two of us were climbing side by side so that I could help him if and when needed. He said he wasn’t going to do it. I did what many parents do, and took a stern line with him. I gave him a talking to and told himself to pull himself together. Now Striptease stars just a few metres right of the first belay stance of Christmas Curry. At this point I glanced over my shoulder to see about half a dozen people, maybe more, sitting on the belay having just witnessed the whole thing. I am confident that each and every one of them will have thought to themselves that I was being an archetypal pushy parent. I guess I was. But I make no apology for it. I know my son very well indeed. From that moment on something clicked in his head and he began enjoying himself. I knew he would. That’s why I was firm with him. He climbed the route in absolutely amazing style and blew me away. I’d expected to have to haul him up bits of it, but not so. He got disco leg for the first time, and he got pumped in his arms. When we reached the belay we let him scamper up the gulley to the top to be the first to summit, and he was on top of the world.
The moral of the story? There is a time and a place for pushy parenting, and I sincerely hope that we get the balance right and don’t end up making him hate the very thing we want them to enjoy. 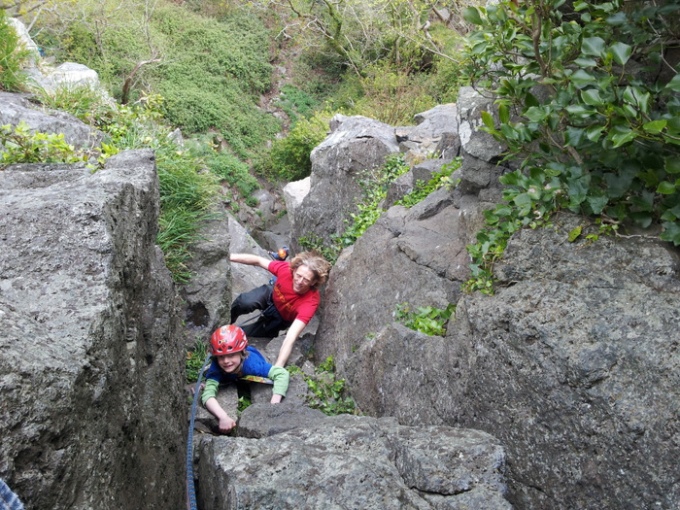 Approaching the belay with pumped arms and disco leg! 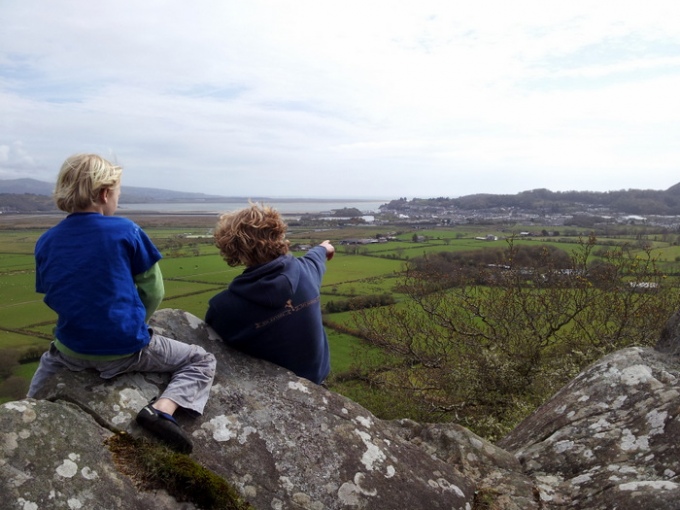 Sitting on the top pointing out my old school in the background (my school bus used to drive under Tremadog twice a day). A proud moment.