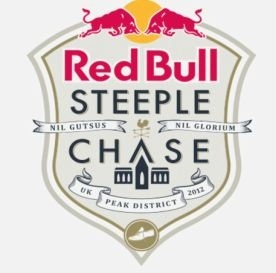 I went to bed feeling rough on Saturday and spent most of the night tossing, turning and sweating, convincing myself that it was a bad idea to get up the next morning and take part in the inaugural Red Bull Steeplechase event – a 21 mile knock-out off-road running race, from Castleton to Bamford to Hope to Edale, and back to Castleton in the Peak District. I woke up at 8 with my alarm, said to myself I ought to at least get out of bed, brush my teeth and look out the window before making a decision. It was of course gloriously and unseasonabley sunny, so I ate a large bowl of porridge and made my way to Castleton to the start. As an event organiser I was as interested in it as an event, and how Red Bull go about organising events, as I was about taking part and running on only 3 cylinders.

Having taken part, and been eliminated at the second knock-out stage in Hope, 12 miles in and in position 59 (55 went through to the next stage) I can say that Red Bull do indeed put on a great event. Right from the start – decent signage to the parking and registration, plenty of toilets for the competitors etc, they impressed. The race course itself was a cracker. Unfortunately I only got to race the first 12 miles, but I will definitely go and run it again, and complete the course when feeling a little better and in my own time without fear of being knocked out. The knock out concept was novel and made for a really interesting race. Basically, at each village (steeple) the slowest 30 or so runners were eliminated from the field, so, for the whole race I found myself looking over my shoulder to see how many folk were nearby, and trying to remember my position. Given that I was only operating on 3 cylinders I spent most of my 12 miles yo-yoing with about 20 runners. They overtook me on the up hill and flat sections, I flew past them on the downhills. There were disappointingly few local fell runners, the majority of the field being made up of road runners who fancied a challenge. They were fit, but lacked the technique to really let go on the downhill sections. It was particularly galling for three members of the same London based Serpentine Running Club to take the first three places in the men’s event. I think that next year we’ll have to get a few of the local big guns out there to challenge. I suspect that the £25 entry fee put off most (most fell races are no more than a fiver), but it needn’t have. The fee included a decent medal, some post-it’s, a pen, a nice hoody, and a slap up BBQ / Hog Roast  with free bar at the finish. There was a brass band playing, and large cushions out under the oak tree in the centre of the village. All in all I felt like I could have been at a decent wedding!

Be interested to know what people think of Red Bull. The drink, the company, their events, their far reaching influence into the world of adventure sports etc.