Tissue In The Hills 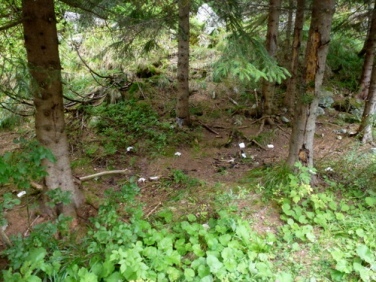 I’ve spent a great deal of time on walking in the hills both in the UK and on the continent over the years and there’s one thing that never ceases to amaze me. Rarely do I see any discarded tissue paper in the UK, but in France, Spain, Italy, Slovakia, Poland etc it’s a constant eyesore along the side of the paths. I’ve just come back from Poland which prides itself as being a nation of outdoor enthusiasts who take to the mountains at the weekends. There’s a national network of incredibly well maintained footpaths as a result, with a library of good scale walking maps in every garage. The national parks are very heavily controlled, encouraging (making) people walk in for many miles along tarmac roads to actually access the mountains in most cases. There are cabins, shelters, and bins at regular intervals along the trails, all giving the impression that the powers that be are wanting people to respect the environment that they love. Nowhere  though, was there a sign saying don’t leave your tissue paper by the side of the path. Sure we all get a call of nature from time to time in the hills. It’s inevitable. How hard can it be though, to disappear into the woods or a boulder field, and either scrape a little hole, burn your paper (unless you are in a hot country as my brother once was and nearly started a serious wild fire, he and his friends frantically stamping down a small area of tinder dry grass – he hasn’t made that mistake again!), or at worst, carry it out with you in a plastic bag. Clearly looking at the numbers of people who are in the hills, and the amount of tissue we are talking, it’s only a minority, but this minority is definitely enough to taint the experience for the rest of us. I suppose that once one person has led by example and left a piece of white tissue it says to others that it must be OK to do likewise, and the fact the it is done in privacy means that the culprits are not caught. I think that some simple signs at the beginning of each walk would go a long way to sorting out the problem.