I read the other day that we are typically subjected to 50,000 marketing messages each day. It could have been 5,000 or 500,000, I can't quite remember. The figure is pretty meaningless, but the message is clear. We live in a world driven by advertising and marketing. Even if it's not in the form of sitting down in front of the TV and watching a series of adverts during your favourite programme it's the bill boards you pass and see out the corner of your eye as you drive home from work, and it's the logos and adverts you see down the side of Facebook or Youtube or whatever website you're looking at.

A friend popped over last night and before we settled down to some serious films screening (more in a mo) he complained that he'd just spent an hour trying to sort out his email. He's recently started up a new tree felling business and is in the throes of putting things into place to make it run more smoothly. He bemoaned the fact that technology had simply made things more complicated and time-consuming and that tree surgery businesses in the seventies must have been a lot more straightforward. Superficially I can sympathise with him in that when your computer gives you the dreaded hour glass symbol (as mine is doing right now as I try to search through my sent mail archives for a certain message I know I sent) it's easy to be critical. However the fact of the matter is that in the seventies if I'd wanted to find that message that I knew I'd sent I'd have had to a) make a copy before sending it, and b) file it in a filing cabinet somewhere, all of which would have taken more time and resources than it will take my computer to find it. The irony doesn't stop there either. He was bemoaning the fact that we have to advertise more aggressively now than we perhaps might have done in the seventies, on the basis that we are competing with the 4,999 other adverts that people will see on a daily basis. As the conversation ended and we cracked open a couple of our favourite beers (we know they are our favourite as we remember drinking them before, most probably because of an advert or a fancy looking beer tap shield in a pub in the dim and distant past) to watch some adventure films. Monday night is screening night for the Sheffield Adventure Film Festival. I get sent a lot of films hopeful to be included in the programme and have to watch each and every one of them in order to shortlist the ones that I think will make the best event come April next year.

We watched about a dozen short films last night. Each and every one of them featured sponsors logos. Not just at the start and finish of the films, emblazoned on the screen so that you can;'t escape them, but surreptitiously included in camera-shot on clothing, skis, surf boards, and all manner of other paraphernalia. The athletes in the films are all sponsored so need to wear the correct hat, face the correct way, and drink the correct cans of drink, which are also facing the right way. The kit that they uses is obviously made by somebody, and they rightly include their logos on the kit for all to see. The filmmakers then approach the sponsors of the athletes and the kit and tap them up for some more money to make the making of the film possible. In exchange their logos are given pride of place at the start of the film. The result, when it's done well, is a slick and enjoyable film that you get to the end of and don't feel like you've just watched a sales pitch by the latest bike manufacturer, but on the contrary, respect the said company for having produced some great bikes and for supporting some talented athletes and filmmakers. Granted not all films hit the mark, but by and large I think that they do, and it's an absolute truth that without the sponsors sponsoring the athletes, kit and film, we would not have sat there last night enjoying the films, and the audience at ShAFF, and Banff and Kendal and every adventure festival on the planet would be much the poorer for it.

In fact, the sponsors go one step further than that, and having produced the amazing films, support such events in order to showcase them to the world. In three weeks time we're running the Buxton Adventure Festival for the second time. BAF is a young event, not yet fully established, but that's not stopped a slew of sponsors from coming on board. Mostly for relatively modest amounts of money, but clearly dipping their toes into a new event to see how it grows and develops. The University Of Derby are perhaps a bit of a surprise title sponsor, but they approached us before the event website had really launched properly last year, offering a 3 year deal. Their goal? To recruit people for their Outdoor Education courses. Rab have come back on board again this year after initially looking like they were taking a change of direction with their marketing strategy. We're delighted. It shows that we delivered a worthwhile event for them last year. They're local which is a bonus as it's always nice to work with people who you can physically meet and brainstorm things with.

I guess the point of the blog is that sponsorship and advertising, generally seen in a negative light, is here to stay and has some amazing benefits like ShAFF and BAF, Cycle To The Cinema, and Cliffhanger.

We're also pretty pleased to have secured permission from the local authorities to erect this banner in Buxton to advertise BAF. 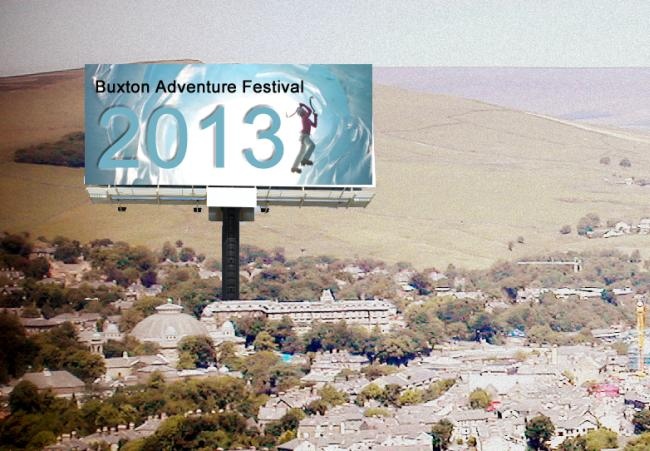 Update: Interesting coincidence between this Blog piece and these two news pieces I've just written as a result of receiving press releases!