Rather strangely, and by complete coincidence they are entering into the world of adventure sports and film! Here's a press release that I recieved last week.

Thule and Epic TV join forces and launch video competition for all lovers of action sports - Go Epic with Thule!

Today Thule and Epic TV, one of the world’s largest on-line extreme sports channels, launch the video competition “Go Epic with Thule”. The competition opens for all active people in a number of action sports to easily compete against each other by sharing their videos with their own sports adventure. 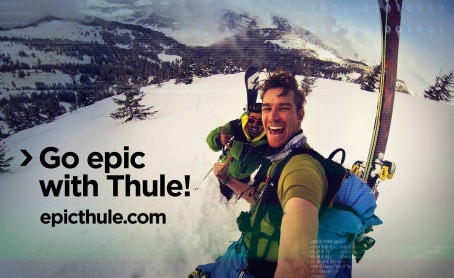 Today Thule and Epic TV, one of the world’s largest on-line extreme sports channels, launch the video competition “Go Epic with Thule”. The competition opens for all active people in a number of action sports to easily compete against each other by sharing their videos with their own sports adventure.
Together with Epic TV, Thule launches the coolest competition of the year for lovers of kite surfing, surfing, snowboarding, skiing, biking and adventure racing, “Go Epic with Thule”.
The Thule Crew – our team of adventurers and Thule ambassadors – are looking for extreme sports talents who love tough challenges and great adventures to co-star in their next video. “Go Epic with Thule” therefore becomes the chance for any action sport lover to become that sidekick you have always dreamt of. Just by filming your adventure and share it with the rest of the community and visitors to the “Go Epic with Thule” website.
The Thule Crew members are actively participating in the competition. As part of the jury as well as sharing their own material. It enables the participating sports lovers to go surfing with Garrett McNamara, biking with Chris Van Dine, snowboarding with Flo Orley, kite surfing with Niccolo Porcella or skiing with Matthias Giraud. They are all icons in their respective sport – and they are just waiting to get their new sidekick.
To qualify, the contestants need to upload their best sports video clip, showing the Thule Crew their skills. A jury will pick a winner each week – for 10 weeks. Apart from scooping our weekly prize, our weekly winners also qualify for the grand finale, in which they can win our Grand Prize – the adventure trip of their life and a supporting role in one of our Thule Crew members’ next videos!
Visit the competition on www.epicthule.com.
The competition starts on September 30 and lasts until December 8.
The weekly winners are announced each Monday on the Thule Facebook page – and the Grand Prize winner will be announced on December 9.
Make sure to like and follow the Thule Facebook page for all the latest updates, coolest clips and competition announcements!
---
About Thule
The Thule brand was established already in 1942. Under the motto Bring your life, Thule globally offer a wide range of premium products that enable active people to bring their luggage, equipment and their kids with them in a safe, simple and elegant way. Thule offers include roof racks, bike carriers, roof boxes, boat / horse trailers, computer / camera / sports duffle bags and children products like child bike seats and multifunctional strollers. The products are in more than 125 markets all over the world.
Thule is the largest brand in the Thule Group.
Read more at www.thule.com