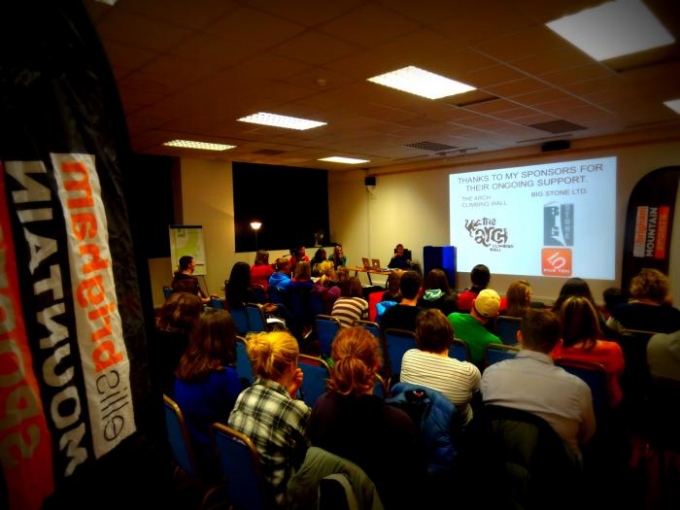 A few months ago  watched this video by local filmmakers Outcrop Films. It piqued my interest. I’d heard of the Women’s Climbing Symposium before, and was aware that it had run for a second successive year – always a sure sign that an event has some mileage if it makes it past year 1!. The video was well worth the watch and at the end of it, just as I was thinking ‘hey, I wonder if they would come to Sheffield’, Steph Meysner, the organiser, popped up on film and said that they were considering some road shows. I was on the phone shortly thereafter inviting them along to this year’s ShAFF Climbing Expert Night. Steph was very receptive, and rounded up a sterling line-up of speakers and the event happened last night.

Steph kicked off proceedings with an impassioned introduction to the concept of the WCS which has been held twice at The Climbing Hangar in Liverpool where she works. She explained how the weekend event has sold out and women travel from all over the world to attend. She introduced the first speaker of the night, filmmaker Jen Randall. I know Jen as she submitted her film Push It – which coincidentally was the title for the evening – to ShAFF. She also works with filmmaker Alastair Lee and we’d worked together on the launch of the 2013 ShAFF trailer. Jen hails from Vancouver, but lives and works in Glasgow. She essentially gave us a fascinating commentary on the process of making the film which features her and a friend (also from Vancouver and born in the same hospital just 4 days apart, but not having met until a year ago in Glasgow!) before screening the film itself. She received a very warm round of applause from the audience as the film finished as I think that some of them were a little taken aback that there was such a good film out there about climbing that they had not heard of, and that it had been made by a woman! I talked to Jen after the event and mentioned to her that I had heard people wondering out loud whether it was available on DVD. She responded with a ‘dph, I’m so bad at promoting it, and promptly fished some copies out of her bag which she’d forgotten to plug!). She then gave an even more entertaining Q&A session where amongst other things she described how her nose had bled all over herself early on their epic climb of El Cap simply down to the sheer effort of hauling their haul bags, and that she’d been a bit gutted that she didn’t have enough camera batteries to capture the gory details at the time!

After a short beer break Steph introduced 20 year old Shauna Coxsey who, having always been at the top of the British rankings, shot to international stardom last year when she finished 3rd in the Bouldering World Cup. Despite her diminutive age Shauna gave another impassioned talk about her life to date, how scary it had been as a 19 year old, to travel alone to China, Slovenia and Austria within the space of a month, the injuries she has already picked up, how she is so much stronger this year than last because she is taking her training more seriously, and generally entertaining and inspiring the audience.

Next came Fran Brown. What a character. If you get the opportunity to hear Fran speak you ought to go listen. Confined to a wheelchair after having fallen from a ladder in her job as a lighting technician at a theatre some 6 years ago she has been through some tough times but recently got herself back into climbing, and somewhat surprisingly (to herself), ended up winning the para-climbing world championships which came hot on the heels of the Paralympic Games (she’s also worked on the opening ceremony, figuring that if she could do that in front of forty million people the world champs would be a doddle!). Filled with wry and self-deprecating jokes she had the audience laughing out aloud for half an hour and was a true inspiration.

Another short break and we were treated to the last talk of the night by none other than climbing legend and local super star Lucy Creamer. Lu’s been at the top of her game for the best part of twenty years, but it’s not been all plain sailing. Far from it in fact. Her talk focused on the injuries that she’s picked up along the way, and how she’s coped with them at the different stages of her life. From being on top form during a sport climbing trip to Spain a few years ago she went into a spiral of decline with a shoulder injury, a badly broken ankle and bereavement to deal with, and is finally coming out of the other end of the trough. It was a very honest talk and an insight into the mind of one of our top climbers of all time.

All in all, a thoroughly good evening.

The evening was sponsored by the Women’s Climbing Symposium and Ellis Brigham.