The Tour De France finished yesterday. I watched it avidly for the whole three weeks, either via the hour-long summary programme each evening, or on a few days, watching things unfold live. What an amazing event on so many levels. It's fascinating, exciting, intriguing, unpredictable and wholly entertaining.

Whilst I am already looking forward to next year's edition of the world's biggest sporting event there's this growing niggle that I have, and that I know is shared with many, many others, and that was really highlighted last night.

I took a photo of the telly to illustrate the issue. 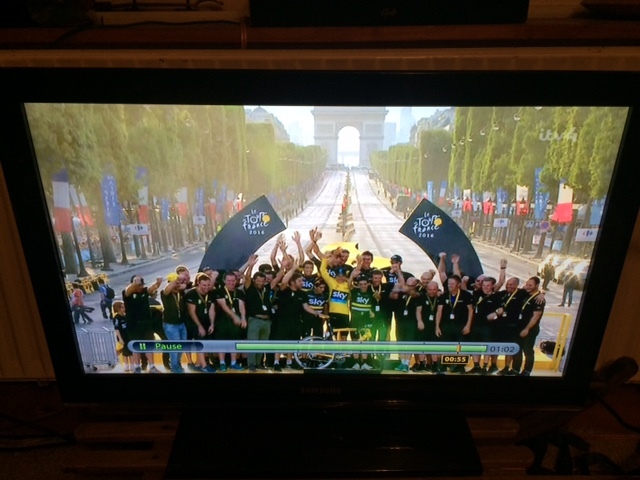 It's a photo of Team Sky 2016, arguably the greatest grand tour cycling team in history, celebrating their dominating win in Paris last night. I paused the programme in order to double check, but it looks to me like there are no women on the team. You'll see from the photo that it's the full team, and not just the 9 riders. It includes the soigneurs, the mechanics, the coaches and the other members that clearly work so well together. But no women. UPDATE: according to Teak Sky's website there are actually 6 women on the 57-strong team. Clearly the photo above does not show the whole team as was implied, and there are indeed women represented on the team, but at a  lowly ratio of 10.5%.

Earlier this year I read Emma O'Reilly's book The Race To Truth. You may remember Emma. She was Lance Armtrong's soigneur. A soigneur effectively looks after all the non technical elements of a rider's life - food, laundry, transport, as well as massage, recovery etc. It's a fascinating book, not least for its honest appraisal of bad boy Lance, but also for its assertion that the world of cycling is inherently sexist. She claims to have been the only female member, not just on the US Postal team, but across all the teams in the tour.

The other thing about last night's catch up programme was its insultingly small amount of coverage of the insultingly small event, La Course. La Course is a single stage, one day racing for women, which has happened for the last three years, on the last day of the men's 3 week Tour. It consists of multiple laps of the same route that the men race later in the day around Paris, but for around half the distance. Last night's highlights programme featured La Course for all of about 2 minutes. That's 2 minutes of a total of over 20 hours of highlights over the last three weeks.

And don't even get me started on the archaic tradition of presenting each day's awards to the winning riders by a pair of matching, pretty women.

The world of cycling clearly needs to wake up.  We worry about doping, but for me the blatant gender inequality runs far deeper and is equally troubling. Sir Dave Brailsford is obviously a smart and visionary man. He's been responsible for turning Great Britain into the world's premiere cycling nation. Both men and women when you look at track cycling (though I know that there are deep-rooted issues within the track cycling community too as evidenced by Shane Sutton's and GB Cycling's scandals earlier this year).

I know that at the Sheffield Adventure Film Festival we perhaps ignored the equivalent gender imbalance in adventure films, but once we made a stand and began to address the issues from within, good things began to happen.

erhaps Mr Brailsford could use Team Sky's position to start redressing the balance? And ITV4, fantastic producers of one of the most entertaining hour-long programmes we have on our TV, could pull their weight too. Only when the big boys start throwing their weight around will the big girls get to shine too.