I've been meaning to write up some of our summer adventures  from 2016 for some time. Decide to do it as a series of separate pieces. Here's the first. Swimming with snakes.

I've still not managed to establish whether they were poisonous or even dangerous snakes, but one thing is for sure, if you aren’t sure whether they are, then you definitely assume that they are! It was mid August in the south of France and we were seeking shade and water. We were in the Verdon Gorge, as magnificent a rock canyon as you'll find anywhere in Europe.

I had memories still lingering from a trip here as s student some 20 years ago where we'd first experienced the fabled fear-factor, belly down on the polished marble edge, peering down into the abyss and marvelling at the climbers inching up. This time we were here with the kids. Whilst they climb we had no intention of lowering them down from the top of the 1,000 foot cliffs to a bolt belay and freaking them out. Their introduction was via an inflatable kayak, along with hundreds of others, approaching the gorge from Lac St Croix at the bottom end. The water here is warm and chalky-green. It was disappointingly popular in August, but the further up river you go the fewer others there are. It's an impressive place, rock walls just a hundred feet apart in places. I revisit the road bridge where twenty years previously we'd spent the day trying to pluck up the courage to make the jump only to be utterly humbled as an overweight guy in a vest and pants pulled up on the parapet, hopped out of his van, vaulted over the railing, and swallow dived into the lake. 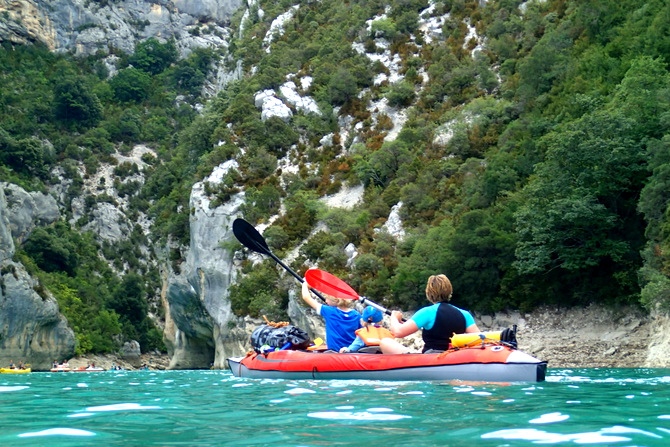 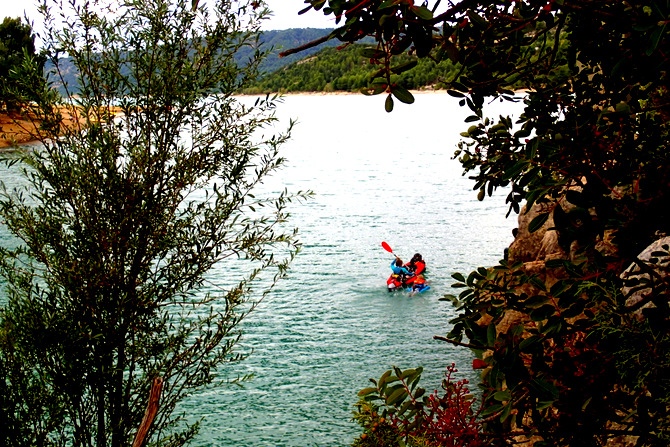 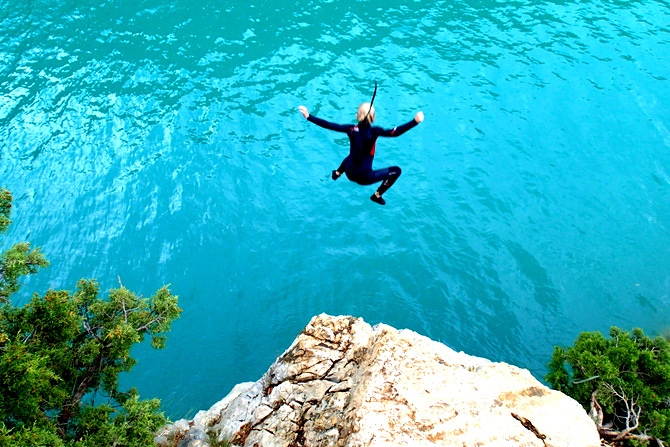 The following day we headed up to Palud, the quiet little village high on the flaks of the gorge with a lovely little climbers' campground with ancient weeping willows for shade and the constant clink of climbers sorting their gear. 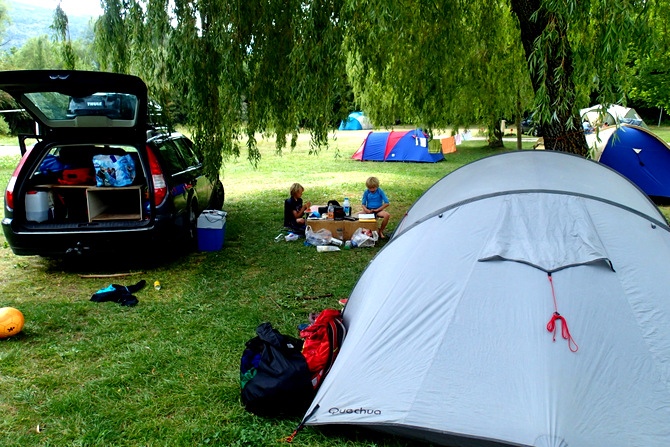 It was here that I spied an entry in the guidebook (Rockfax) for an old via ferratta route down in the depths of the canyon. It started at the bottom and headed up - much less scary for all - so we headed down. The approach begins immediately from the car parking area by the tunnels. There's a permanently installed wire Tyrolean traverse to deliver you to the opposite bank. 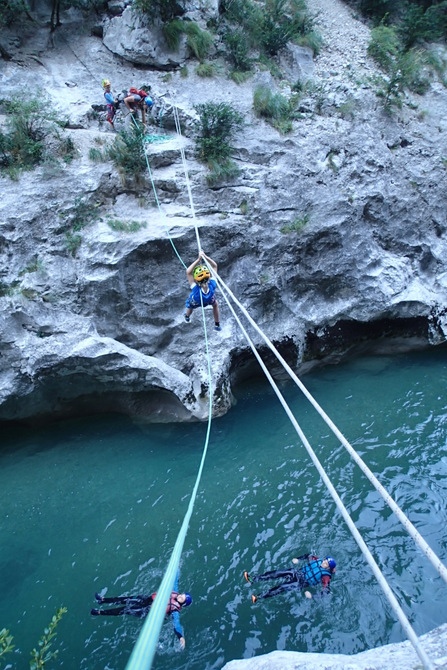 Over we went, each with our own via ferratta lanyards, and the boys on a safety rope so I could pull them over if need be. There was no need! From there it wove its way up and right towards the famous climbing sector called Hulk. It's actually the recognised approach route for this climbing sector and as such there were others on it. It's really relatively basic by modern via ferratta standards, more like Snakes & Ladders in North Wales with old rusty ladders with missing rungs, and faded, fraying bots of rope linking everything together. 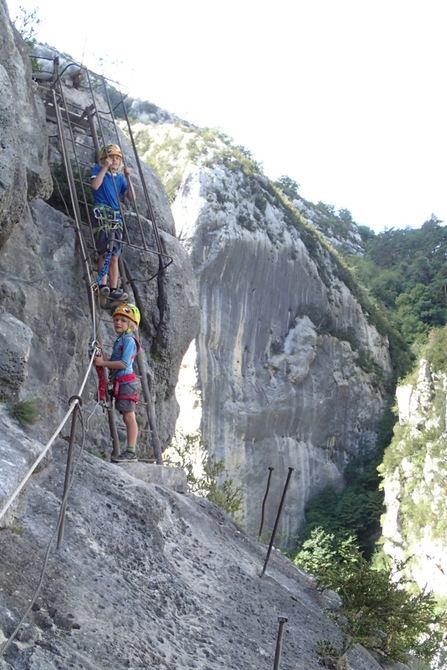 Probably not everybody's cup of tea, but in stunning scenery and on relatively easy angled ground it proved to be a fairly straightforward route. When we arrived at the top we were faced with returning by the same route, or abseiling back to the bottom down a long slab. We chose the abseil. After a false start we found the better (lower) starting point and I set off down. 50m down. And 20m across. A big diagonal line to a cluster of bolts and slings, not all of which inspired confidence. The boys slid down one of the twin ropes, attached to the other so as not to swing out into space never to be retrieved! At the belay whilst waiting for Soph, and still some 50m above the river, they put to rest any fears I had over their acceptance of exposure. It seems that as long as they are tied in safely there is no such thing as exposure! 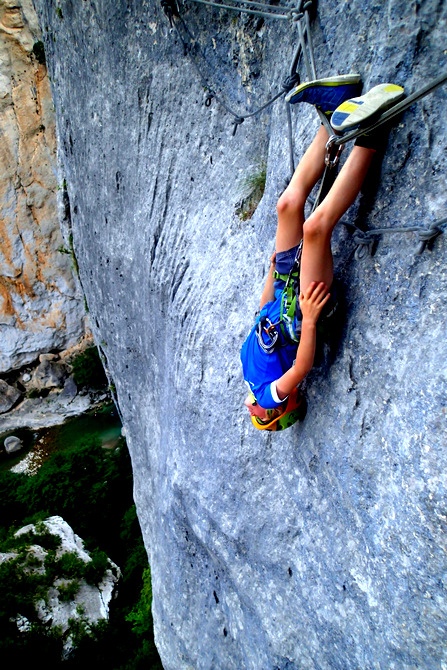 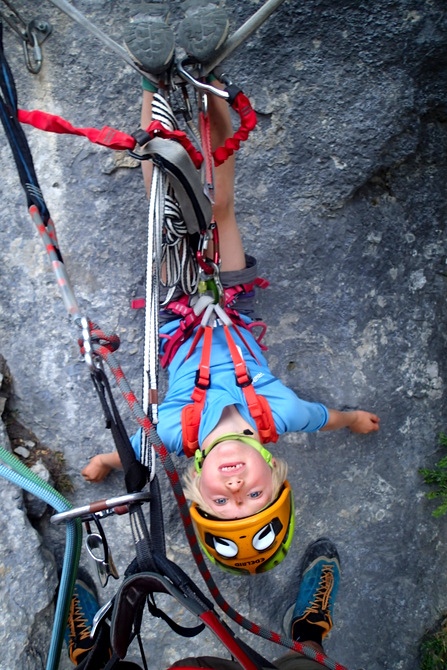 Back at the river we located a second cable and returned to the original bank before climbing up some steel rungs to a window in one of the tunnels! A proper adventure. The following day was unbearable hot. Another guidebook hinted at an easily navigable canyon down a tributary arm of the main gorge which might make a nice couple of hours round trip. L'Artuby  is famous for its bridge which spans the high canyon walls with a drop of some 100m. We drove to the bridge, pausing along the way at some of the many view points to watch and photograph the amazing vultures soaring on the thermals created by temperature differentials. 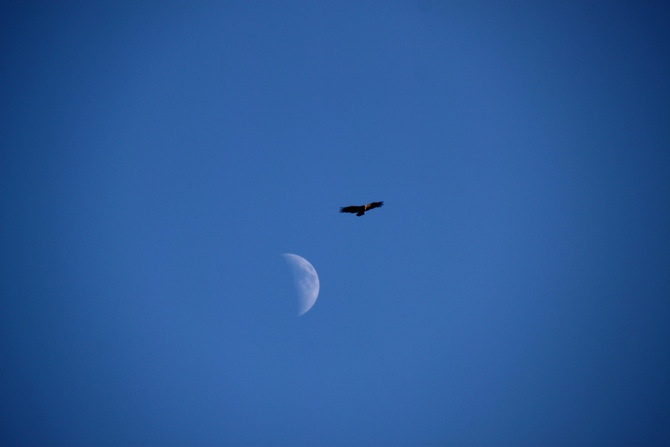 Our arrival at the bridge was muted as we rushed up to the bridge parapet and looked over only to see a dry river bed! Disappointment and a family meeting. We decided to head down anyway, but to take with us some camping gear. At the very least we could spend the night down there. 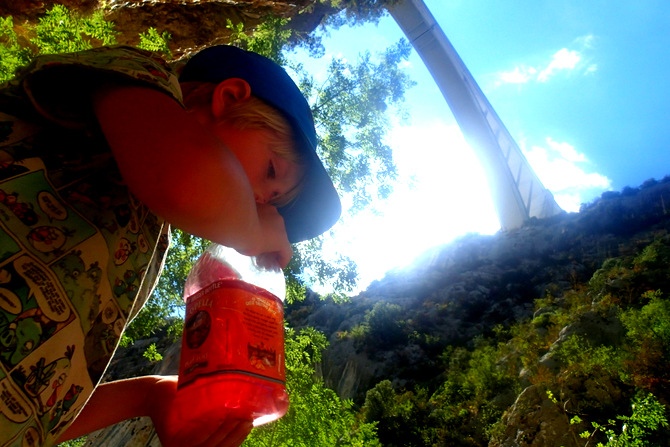 The route down immediately heads off into head-high scrub, picking a tortuous route through via a series of painted marks on the jagged limestone. Worryingly the painted marks are interspersed with warnings from the military not to head into the bush as there could be unexploded munitions in there! Soon, however, it steepened up, with ladders and ropes reminiscent of yesterday's antics, but in better condition. 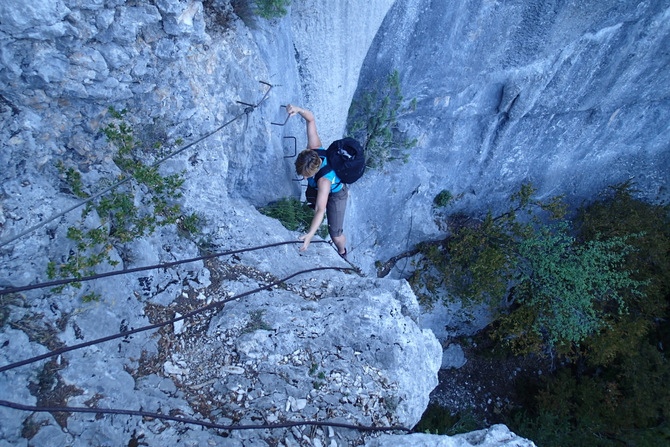 The full descent took around 25 minutes, gradually cooling as we went. Once in the dry river bed we turned right and headed in the direction of the main canyon and the Verdon River itself. Initially it was little more than a series of water worn boulders choked into the river bed, some basic scrambling skills required, but nothing more. As the canyon walls drew closer together the chokes became grander and pools began to form. We also see our first snakes. 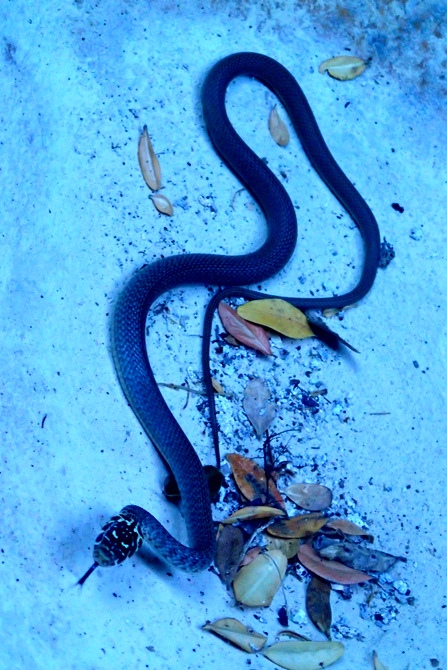 They are small, the thickness of a pencil and about 8 inches long, but black and very aggressive, raising their heads and snapping their teeny mouths at us, presumably in fear. I'm not entirely sure what they are doing down here as presumably the whole river channel is washed through regularly enough when the rains come, but there are enough of them to suggest that they somehow live down here. By the time we reach our first significant stretch of water we've seen nearly a dozen snakes so it's no surprise to see one swimming across the pool. So we're faced with a dilemma - do we head back through snake alley and find our way back up to the car, or do we push on and enter the snake pool and continue the adventure?  Obvious really. Of course, I am the guinea pig and first into the pool. It's deeper than I am tall so I have to swim. Around the corner I can see that there are boulders at the far end to climb out onto, so I coax Bryn into the water, convincing him that even if the snake were to bite him it wouldn't be able to pierce his wetsuit (Soph and I had left ours behind to save weight!).  He's a brave lad and follows me in. We both splash and make lots of noise to keep the thing at bay, desperately hoping that its parents are not lurking anywhere nearby, but probably correct in the assumption that the poor thing is absolutely petrified and can't actually escape the water thanks to the sheer sides. 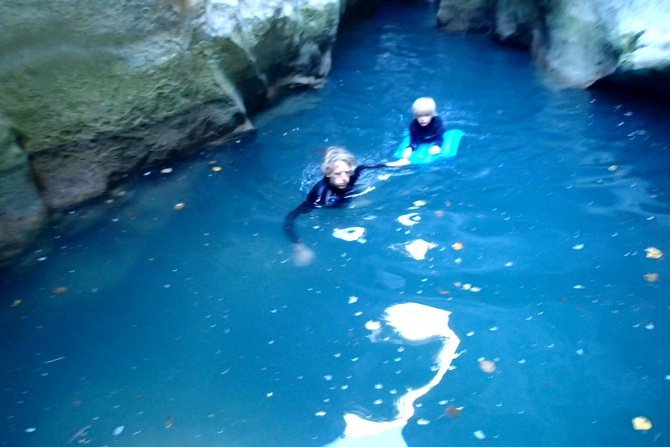 I return for Dylan, this time deciding to rescue the snake with a stick and hopefully make the crossing safer for poor Dyl who is only 6 and definitely not in his comfort zone, and for Soph, who isn't 6, but does have a near-phobia of snakes of all shapes and sizes. Half a dozen more pools, and a couple more smakes see us 'safely' through the canyon and we join the main flow of the Verdon itself. The river level is controlled by a hydro electric dam further up the valley and we knew that it was due to open its gates the following morning, so wade across some fast flowing water to an idyllic stone beach on the far bank. There's a small cave there and enough bone-dry drift wood to make a lovely fire. Bivvying out on the beach ranks up there with any adventurous camps that I've had the privilege of finding over the years. The boys were very happy indeed. 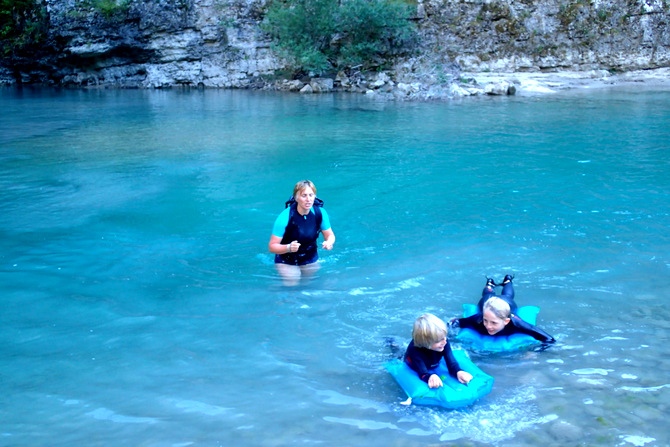 I set my alarm for 6am, worried that if we woke too late we may be trapped on the wrong side of the river once they released the water from the dam. I took a quick glance at the level and hit snooze for another 15 minutes. Mistake. When they open the flood gates they clearly do it quickly as the level tripled within the space of 10 minutes. We wake the boys and get going quickly. I take one end of our rope, a sturdy bit of drift wood to use as a walking pole, and head out into the river. Last night it was perhaps knee height. This morning it’s up to my waist, and lapping higher. The crossing os probably about 30m, but I can barely communicate with the others as the noise levels have increased dramatically and are amplified by the canyon walls. I drop the two rucksacks that I have carried over, and head back for the boys. It's too high for them so I have to bring them over, one at a time, on my shoulders. It’s nerve wracking, but goes without incident. Had I lost my footing it'd have been a fairly straightforward rescue to simply swim with the current back to the beach downriver of Soph. The boys can both swim, and the water is not glacier cold, but there's definitely a nagging feat that this isn't wholly sensible. With the boys over I go back a third time for Soph, helping to keep her on her feet as the water rises to well above her waist. When we regroup on the correct side of the river for out walk out there's a definite sense that we've just had a good adventure! The walk out is long, but cool and pretty. About an hour of switch backs up through the heavily wooded, and steep sided canyon wall, a real masterpiece of route finding. We arrive back on the tarmac road to the rather bemused look of a view-point café proprietor who was not expecting to see anybody at 8 in the morning arriving on foot! Whilst we are sitting drinking hot chocolate and eating pastries a ranger comes in. I attempt to ask him about the snakes and he mimes something that looks like "oh yes they are small but poisonous"… We slept on the beach with the two big trees on. Absolutely idyllic.