You may have noticed that there wasn’t much happening on the Heason Events website during September. That was because we were taking advantage of the fact that our kids are still not at school and headed south for the month for some fun. I’m definitely of the work-hard-play-hard school so a three and a half week trip to France was just the ticket after a very full-on summer.

First up was a week in the Ecrin Alps. It’s somewhere we’d heard talk of over the years, but never ventured to. Originally meeting friends there, plans changed when they had to bail. That and the co-inciding with a 10th wedding anniversary meant we plumped for an apartment instead of a tent. A couple of emails and a very excite phone call later and we’d hooked up with an old mate Jerry Gore who moved to the region nearly a decade ago. Now Jerry is a very excitable person. He used to be marketing manager for Cotswold Outdoors, then worked for 9Feet.com. Ten minutes on the phone with him had us itching to get down there. We arrived weary and hot (it was 27 degrees at 6pm!) just before the supermarket closed down for good, bought some beers and pizzas and followed his directions to the apartment. It was a relatively small 6-berth ski chalet with a kit room and sun lounge. I say relatively small, but that’s if there were 6 of you. For the 4 of us we were soon unpacked and grandly comparing how big the place was compared to our family tent! Nicely kitted out by somebody who genuinely cares about his guests, we were very happy to find guidebooks to walking and climbing in the valley as well as all the bits and pieces you’d want in a kitchen for a week. Not only that, but half an our later Jerry arrived with a bouldering mat, some maps, and more guides still (to bouldering and via ferratta). More useful than all of that though was the wealth of information that poured out of his mouth in the half an hour that he visited.

8am the next morning and he was back, this time for an orientation run where he showed me around the village (I forgot to mention that we were in La Casse, which is a kind of suburb if you can call it that, of the tiny village of Vallouise in the Ailfroide Valley. Armed with the knowledge of where the boulangeries were (and most importantly which were the best ones!), the kiddies mountain bike course, the museum, the nature trail, the outdoor shops, the cash machines etc, we were well set up for the week.

And what a week it was. Despite feeling remarkably chilled out we managed to fit in wild swimming, a memorable via ferratta, bouldering, sport climbing, walking to a mountain village, a tyrolean traverse across the river, plenty of sessions on the mountain bike course, and a few meals out.

Jerry runs a number of properties in the village. Details are available at www.alpbase.com 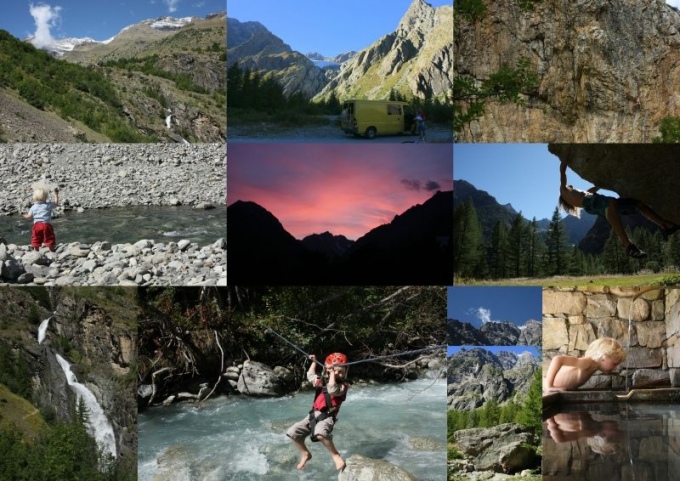 That was week one. Weeks two and three we moved West to the Ardeche, camping with a bunch of mates on the rived Chassenaz (Camping Les Blaches). Another family destination that had come highly recommended and somewhere I had been meaning to visit for about 15 years having skimmed past it back in the day on a European road trip. If you like water, sport climbing and sunshine there can’t be many better locations. Each morning a team would literally stumble out from the shady camp area, all of fifty metres to the river, wade across (varied from mid calf to waist depending on the hydro plant upstream!), and climb on the half mile long Chaulet Plage crag. We were lucky enough to team up with a certain Mr Adrian Berry who was resident in the campsite in his super-duper van, completing the Ardeche section of his latest Rockfax guidebook to the region. He provided us with topos and we reported back each day on the ratio of sandbags to soft touches, and helped allocate the stars fairly! Lunch time and afternoon was too hot to climb so fun would be had on the beach, or on a shaded walk in the surrounding and amazing limestone rock gardens, or boating on the river and attempting to catch some fish for tea, before heading back out on to the crags for some more climbing – only this time much sweatier! There were visits to the Ardeche itself, the Pont D’Arc being incredibly impressive and yielding some awesome deep water soloing, an attempt to walk some 13km of the gorge, but being thwarted by a waist high river crossing with young kids, climbing at Mazet Plage, Actinidas and Cirque Les Gents, and even a visit to one of France’s loveliest villages. All in all a thoroughly decent time. 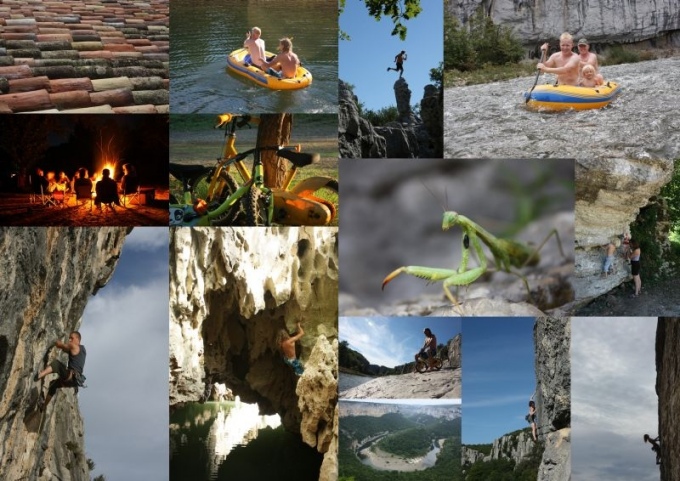 And now it’s back to work and back to rubbish weather!