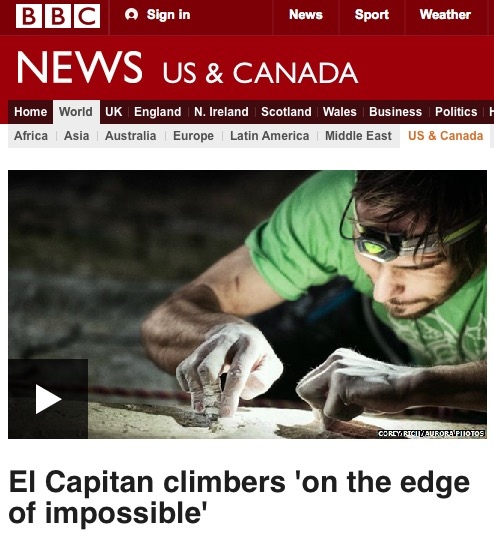 I’ve just woken up to an interview on BBC Radio 4’s Today programme about the Dawn Wall climb by Justin Webb - the BBC’s former Washington correspondent - with Hazel Findlay and Andy Kirkpatrick where Justin is clearly struggling to get his head round the concept of this climb.

“Holds the size of matchsticks, you say?!”.  (Last week his colleague John Humphreys exclaimed, ‘They’re climbing in the dark?!”)

I was smiling at their incredulity, thinking how amazing it is that such a niche sport is breaking through to mainstream media.

Yet, the first thing I see on Facebook is a post on the BBC Ten O’Clock News’ coverage by my colleague, Sheffield Adventure Film Festival Director, Matt Heason, criticising the reporters for using building heights as a point of comparisons and a flurry of equally sarky comments.  [Yes, this is his own blog I’m slagging him off on.  And yes, he’s paying me to do this!  He’s a good bloke to work with.] 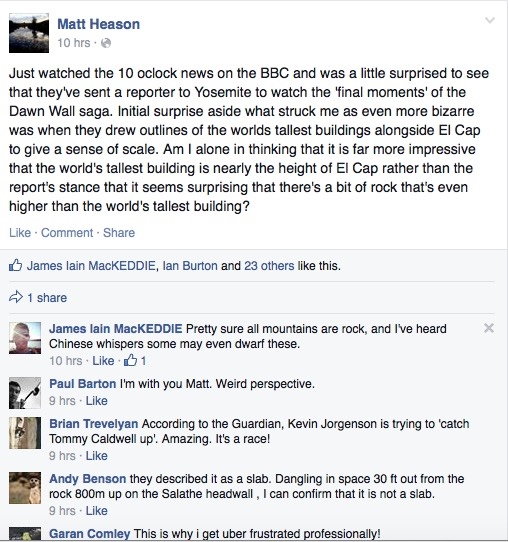 I’m a former Liberal Democrat Party Political Press Officer, turned BBC Radio 4 news producer and documentary maker.  Before that I specialised in the Common Agricultural Policy.  That’s why I wake up to Today.  Hands up, I am looking forward to the General Election.

I am a keen runner and cyclist but I had to go on a fear of heights course when I started working with Matt to even get up the courage to start climbing.  This is now my fifth year working on the Sheffield Adventure Film Festival.  I still struggle to articulate what many of our films are about to a general interest audience.

When my Mum came up to visit and saw boulderers at Calver she thought the mats they were carrying on their backs were for flying off the edge!  She simply could not comprehend anyone climbing a rock without a rope.

Yesterday, I sat in a meeting with sponsors wanting to appeal to bigger audience.  I draft press releases to try and attract more people to our festivals.  I spent hours over Christmas re-reading and re-writing each of our 100+ film descriptions so they can be grasped by the general public.

It is not normal to climb high walls without ropes, fly without aeroplanes, sprint up mountains, cycle down them at 100kph or to ditch your job and skateboard across Australia.  It's amazing and inspiring but it is outwith most people's comprehension.  And thank god, because if we all did it, you'd all be moaning about how there was no space at the bottom/top of the mountain and everywhere would have Everest-style traffic jams.  And noone would be doing normal, boring jobs, earning money to spend on seeing films that allow them to dream about going off and doing crazy things.

This is the first year I’ve felt confident about going to Kendal without feeling like a stupid outsider.  I totally understand my non-adventure sports’ friends reluctance to come to events I organise because they feel like they won’t fit in amongst the belay jacketed climbers, lycra legged runners and baggy shorted mountain bikers.

(Hell, I’m still reeling from seeing a normal sized woman with a bit of flab round her middle and dimply thighs proudly twanging her bikini knicker elastic on her generous, my-size buttocks as she heads into the swimming pool on the #ThisGirlCan video.)

I cannot tell you the number of times Matt has patiently had to explain to me the difference between free climbing, sport climbing and trad climbing.  Luckily I’m married to an adventure sports writer who is also very patient in his explanations.  I get to air my ignorance in the privacy of my own home.

HAVE A BIT MORE EMPATHY

I’ve had a the privilege to sit in Radio 4 News editorial meetings during the five years I was on The World at One and PM teams.  You try wrapping your head around a one-off sports story you’ve never done in a place you’ve never been to, then two minutes later booking a guest on Syria before writing a brief on the history Gordon Brown’s private finance initiative to help explain why a private company is now pulling out of a hospital contract under a Tory government before you then get switched to chasing someone in Paris about the doubling of Charlie Hebdo’s print run.

They are talking to their audience - and their audience knows next to NOTHING about what you do.  Stop laughing at them.  (Well, not entirely because they are quite funny).  But when you stop laughing, please think about the tiny (but important) place adventure sports occupies in the world and help spread the word about your amazing stories.  If we want to promote this industry and bring money in to pay athletes to do what they love and pay filmmakers and photographers to make a living covering them, then you’re going to have to engage with the outside world.

Meanwhile, if you’d like to buy me a pint at the Sheffield Adventure Film Festival and discuss the merits of a first-past-the-post electoral system versus proportional representation and the impact of coalition government, I’ll be standing at the bar waiting.  Lissa.