A quick one. Been busy of late recovering from Cliffhanger and tidying up loose ends. It was a roaring success with 20,000 people there over the weekend. It rained heavily, but after we closed the site on the Saturday night and before we opened it on the Sunday morning :-). There are some cracking photos here.

More importantly, on the Tuesday after Cliffhanger I had arranged for an experimental event in the shape of a raft race from Grindleford to Calver Bridge. Exploring the river is something that had been on my wish-list since we moved in, but a combination of consecutive poor-weather summers and never finding anybody to do it with had meant I hadn't got around to it. I sent out an email to a load of friends a couple of weeks ago inviting them to turn up in teams of two with an inflatable boat. I'd expected one or two teams, and wondered whether even those would turn up when it decided to chuck it down at 6.15! I was surprised to see 10 boats in the car park when I arrived! Well, I say boats, but some were in canoes (inflatable), one team was on an airbed complete with pillow and duvet, and there were even a couple of rubber ducks! It was unanimously agreed to be a whole heap of fun and I would reccomend that anybody who lives near a river of any size organise something similar. We've promised to make it an annual event and are contemplating trying to raise some money for this. More on the disgracefully little amount of access we have to our rivers in the UK another time. 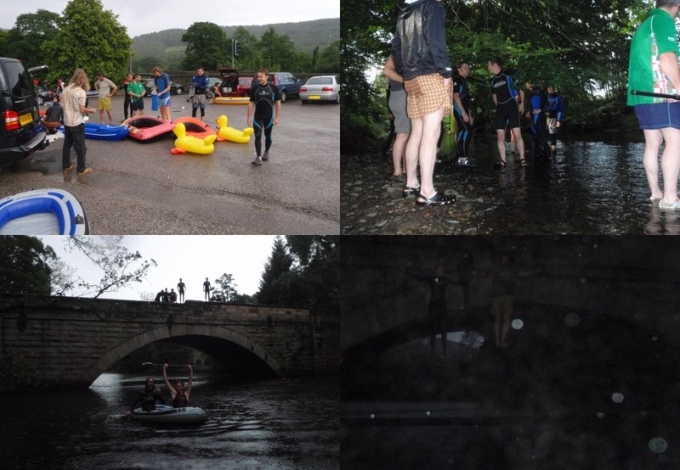