A Lady With Vertigo

A few months back I posted news that I had taken on a PR specialist to help promote Heason Events events. Lissa Cook is her name and she's be doing good things! I've just done the number crunching for ShAFF and bums on seats were up by 66%! At the time she started I posted a message on this site and on my Facebook Page and mentioned, in passing, that she suffered from vertigo. Will Legon is a sharp-eyed mountain instructor in the Peak District and immediately spied an opportunity. Within minutes of posting the news on Facebook Will had been in touch and offered Lissa a place on a course he runs to cure people of their vertigo. Somewhat bravely, Lissa accepted. After an effusive text on Saturday evening in which she claimed that abseiling at Lawrencefield had quite literally changed her life, I headed up to Stanage yesterday afternoon to see her in action and take a few photos for the record. I arrived just after she had failed to climb a mod route called Martello Cracks. She was having a 'good' time, but was a little frustrated. With an audience and a camera at hand (ever the PR  girl!) she headed on up again and literally sprinted to the top. Will was waiting and guided her over the top lip, only to be flattened by a very happy, almost delirious Lissa, who has just cc'd me in on an email to Will asking if she can book on to his rock climbing for beginners course!

As well as doing my PR Lissa runs her own dress-making business Peak Princess.
Will runs Will For Adventure and is based in the Peak District. If you are scared of heights and would prefer not to be, it sounds like it could be worth giving him a call! Here's the course itself. 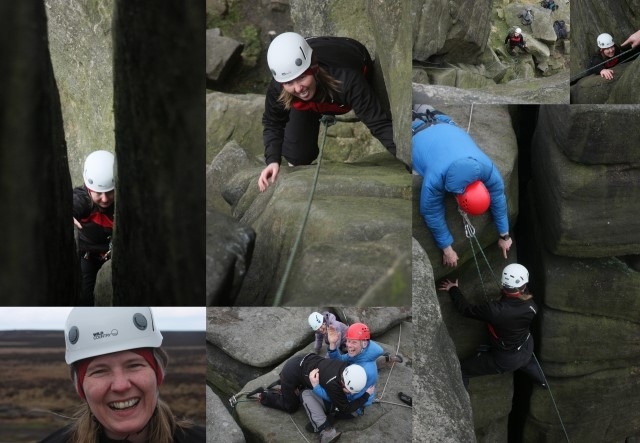