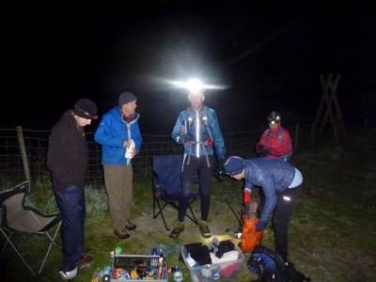 Last Friday I went up to the Lakes with a friend from the village as part of a large support crew for another friend, also from the village, and both called Mike, who was attempting the Bob Graham Round. The BGR is a serious running challenge: 42 peaks, 70-odd miles, 29,000 feet of height gain and loss, and to be completed in under 24 hours!

I’d been roped in to support on leg 3 (of 5). Leg 3 is the graveyard shift. People generally start at around 6 / 7pm, meaning that they start Leg 3 at about 3am. Most people make their attempts during the summer months which means that it gets light shortly after starting Leg 3. Bearing in mind the fact that I have only really started running regularly this  year (I signed up for the Snowdon Marathon in October which has given me a bit of a goal) I was a little daunted at the prospect of running 16 miles (Leg 3 is the longest of the 5). What had encouraged me to say yes was the fact that those 16 miles would be run over a time period of about 6 hours. A few weeks back I ran the Kinder Trog, which was also 16 miles, in just over 2 hours so I was pretty confident that I wouldn’t be slowing anybody down.

The alarm went at 2.05am. Painful. 10 minutes and we were in the car headed along a very quiet country lane to the change-over with a box of food, stove, tea, pot noodles, spare clothes – basically anything Mike needed. I packed a bag with spare clothes, waterproofs, food, drink, a camera, some gels and a map. Mike duly arrived with a small entourage of supporters – a navigator, a packhorse, and a ‘spare’. He was 10 minutes ahead of his self-imposed 23 hour schedule, so chosen to give him an hour of play if things started to go pear shaped. His packhorse unloaded some more clothes and food, a bothy and a first aid kit into my bag (I was the designated pack horse for Leg 3), and we set off after he’d slurped down half a pot noodle and a mug of tea. We’d opted for 1 head torch for 4 of us as it was already getting light by the time we set off – steeply uphill for about 1,500 feet. I ran at the back with the torch and Mike duly stabbed me with his walking poles which he’d opted to run with in an attempt to save his knees.

The next 6 hours were thoroughly enjoyable. Once I was over the initial shock of the early start the occasion soon took over. The sun came up in beautiful oranges. We were alone up in the hills. The pace was surprisingly slow (hence the 6 hours for 16 miles) – the protocol is to basially walk the uphill sections, jog the flat sections and run the downhill sections. Having already run around 28 miles over Legs 1 and 2 Mike was starting to show signs of pain and spent a lot of Leg 3 in his own little world. Our spare supporter, an accomplished runner who completed an unsupported BGR many years ago, was ill and feeling the effects of the Saunders Mountain Marathon the previous weekend, and dropped off the pace, leaving myself as packhorse and Kirsty, who also completed a round a few years back, as navigator. Kirst y and I basically kept feeding Mike bits of food and handing him an open water bottle, took his poles off him when he didn’t need them, carried his stuff, worked out the best route, and generally chivvied him along.

The other reason I had been asked to do Leg 3 was because of my climbing experience. Towards the end of the leg there is an option to take a direct line up onto Scafel Pike via Broad Stand, an exposed 15 foot rock climb. The other Mike had already put himself in place with a belay and a rope so that when we arrived at Broad Stand all I had to do was tie the rope around Mike’s waist, and then help him climb the impasses. Having been fine all morning it started to rain about 15 minutes before we arrived at Broad Stand. Add to this the fact that Mike had dropped about 45 minutes from his schedule, and was petrified of climbing, and we were up against it. I bullied him up the 300 feet of wet rock above the roped section, and we waited on the summit for 5 minutes to catch breath and get directions from the other Mike on the best way down. We then raced down to Wasdale and pulled back 10 minutes from the deficit, arriving at the next change-over to smiles and cheers.

I felt suprprisngly good considering this was the furtherst I had ever run, and quite fancied carrying on with the next leg, but I had to drive a car around to the next change-over on Honister Pass. Mike, Rich (who had dropped out of our leg) and I drove around, fighting off sleep in the sunshine, and stopping for a very welcome breakfast, having handed him over to a new set of supporters. We waited at Honister with the next crew with baited breath. He’d left Wasdale about 45 minutes down meaning that he had 15 minutes of ‘spare’ time. Surpsisingly I hadn’t seized up during the wait so I decided to tackle the last leg with him too. Leg 5 is a relatively short 11 miles, about 4 and a half of which are on tarmac back into Keswick. I think around 8 of us ran the last leg together, doing our best to encourage a very, very tired Mike, to keep going. The sun shone, it was mainly grass underfoot, and the whole occasion was incredibly uplifting. When he hit the tarmac he changed into a pair of road shoes, put on his Dark Peak running vest and a clean pair of socks and shorts, and doubled his pace to finish in a very credible 23 hours and 42 minutes.

It opened my eyes to running long distances in that if you drop your pace you can cover some serious ground.

Here are a few photos from the day. Well done Mike.

Just had an email with some more photos of the day, with a few particularly guesome lookng ones of him at the last change-over lookng totally wrecked. These photos were taken by one of the supporters on Leg 5 called Dave Taylor. I got chatting to Dave whils we ran, and discovered that he is a thoroughly nice chap. I had seen him at the odd race around the Peak. He lives in Sheffield, and has just started up a business guiding people fell running. Check out his website and Facebook page.