Not many summers go by without an attempt at some challenge or other. Previously they've always been climbing related ones - starred HVSs at Stanage or Millstone for example - but this year it was to be a running challenge. 6.15am last Saturday saw five of us hopping about with excitement in the car park at Pen Y Pass as the sun broke through a cloud inversion as we set off on a fairly epic (by our standards) run.

Actually, to call it a run is something of an overstatement. The majority was walking fast as the terrain is simply too steep and rocky to allow proper running with tired legs. We'd done a little research beforehand and worked out wht we figured would be the best route. If one is trying to set a 'time' for the route then the time starts and finishes on the summits of the 1st and last peak, regardless of what order they are climbed in, but it does not factor in getting up the first peak or down the last one. As such we'd already climbed Crib Goch and Crib Y Ddysgl by the time we topped out on Snowdon. That first hour and twenty minutes saw the best weather and the best views. Legs were fresh and we had no idea just what we were letting ourselves into. There were quite a few other folk up and about at that time and it turned out that virtually all of them were doing the same thing that we were doing, though mostly at a walking pace with rucksacks full of spare clothes and food as opposed to our lightweight approach! 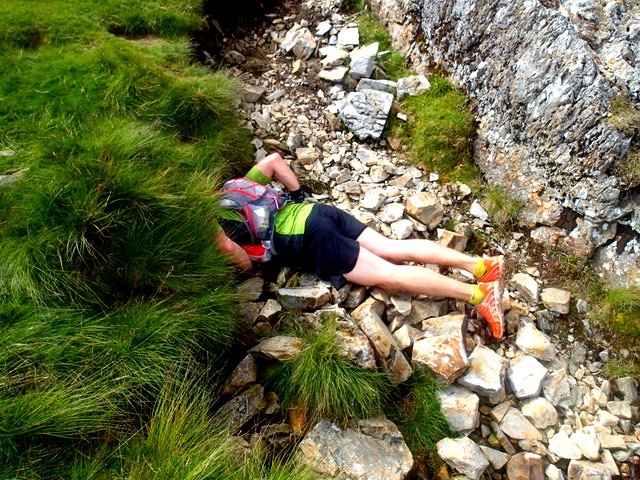 Looking for water in the Glyders

From the summit of Snowdon we trotted down the tourist path towards Llanberis, then followed the train line for half a mile along the ridge above Nant Peris. The previous night we'd spied our intended route down off the ridge, steeply into Nant Peris, and found it thanks to clear conditions. The slog up Elidr Fawr from Nant Peris was the longest single climb of the day, some 2,700 feet, and the legs were definitely starting to feel it. From the summit of Elidr Fawr it was tougher than expected dropping down and then back up again to Y Garn, then down and back up again to the Glyders where the cloud caught up with us (I am not sure that I have ever been on the summit of the Glyders in clear weather!). I'd download a fancy new app for my phone (https://itunes.apple.com/gb/app/outdoors-great-britain-gps/id336150457?mt=8) and had paid the £14.99 for a 1:25,000 map of Snowdonia and had roughly mapped our intended route. It came into its own once the cloud was down. With the map stored on the phone and 3G data turned off it made virtually no impact on the battery life of the phone which was still more than half full by the end of the day. So long as the phone did not get wet (it was in a waterproof holder!) and the touch screen worked it was marvelous. We could see at any point in time exactly where we were in relation to both the map and our route. 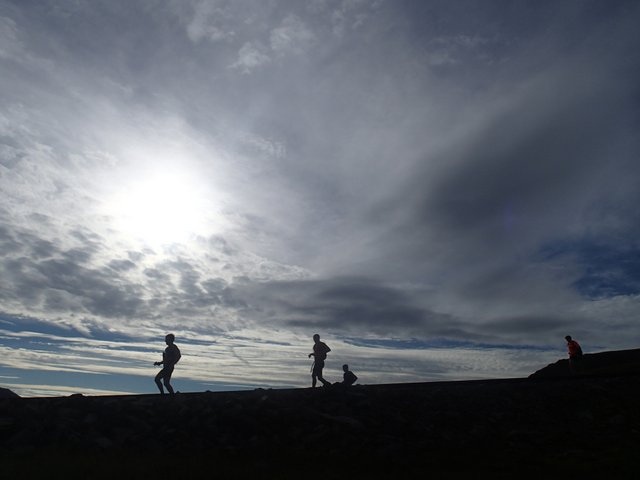 The toughest part of the whole day was descending off the glyders down Bristly gully. We could hear people down below us so opted ot stick to the more solid rock in between the gully and the ridge which proved very technical and slow going (definitely not running territory!). A quick scramble saw us on the summit of Tryfan, before we headed back to the Bwlch and down under the East face of the mountain to a rendevous with friends and family who had food. Up until that point we'd been eating flapjacks, gels, and in Ian's case Marmite and honey sandwiches! I surprised myself by managing a pizza, three eccles cakes and a banana. I was further surprised to go from feeling fine to feeling very not fine for the hour after our stop as we literally slowed to a snails pace on the climb up Pen Yr Ole Wen. Ive read a number of books on long distance running and none has ever mentioned that it's wise to eat at the top of climbs to let your body digest the food on the descent, but it seems like a good idea to me and one which I will be experimenting with next time the situation presents itself! Once over the summit and into the Carneddau the whole thing eases off. The ground becomes less rocky, the climbs up and down are shorter and less severe, and the end is in sight. There are still plenty of miles to cover, and along descent from the final peak of Foel Fras awaits. We opted to descend cross-country down into Ogwen rather than the traditional route down the road into Abergwyngregyn. 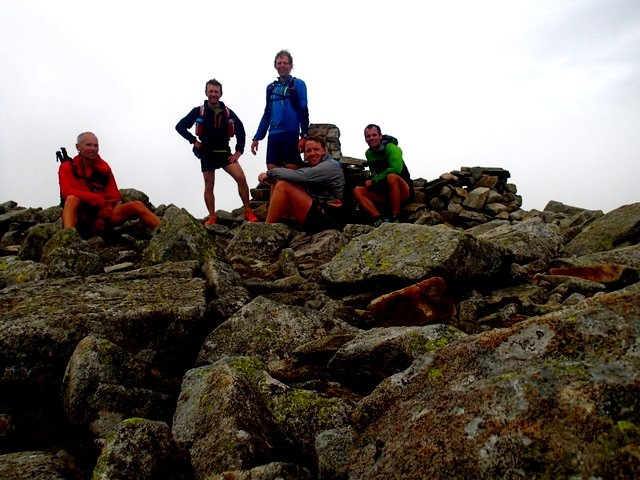 All in, we covered just over 35 miles and 4,000m of heigh gain. 15 peaks summited. Lessons learned: eat at the top of hills not at the bottom, take more water for the final leg in the Carneddau as there is none up there, take a map and compass, but pay for the phone app as it's far faster.

Next challenge: to run it faster betwee peaks (and to catch the train up Snowdon to start it ith fresh legs!). To run it and climb a rock route on each mountain...