This Made My Day (And Elliot's) 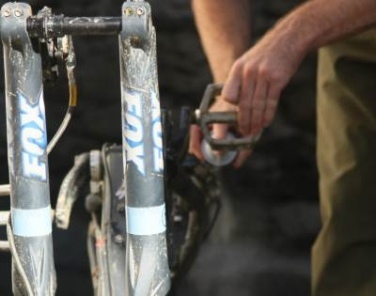 Last Sunday was our local triathlon, the Hathersage Hilly. My wife was competing and the bike leg of the race scoots past our front door so I was out with the boys at 9am to cheer her on. We chalked messages on the road (but she didn't see them!) and clapped all the competitors as they came past. A few minutes after one guy passed he returned on foot. My wife received a race report yesterday and was chuffed to see that what happened next was reported with bells on. Here's part of the report:

My personal favourite is an example of everything that you want to be right with the world and sadly everything that’s wrong with it at the same time. Elliott had completed the swim in a little over 9 minutes and had a leisurely transition of something approaching 3 minutes before he set off onto the bicycle route where the joys of the open road, a cool morning, welcome shade under the trees and the pleasant silence of only the wheels turning for company – except the silence was quieter than that which he was expecting and the pedalling a lot easier than he had perhaps trained for. Imagine his first thoughts when looking down between his legs he was greeted by emptiness from the pedals to the rear wheel!

Thankfully Elliot is a glass half full man and upon witnessing his misfortune, rescued his chain and set about making repairs at the roadside. Whilst cajoling himself into a moment of calm and calling on his resolve to make the ends of the chain meet and make friends again he was greeted by a friendly voice from nearby. A non-competing onlooker had observed Elliot’s predicament and without hesitation brought forward his own bicycle to loan Elliot so that he could complete the race. I’m sure that there are many amongst us who wish for angels like this during our own daily hour of need, but here it was in the flesh and metal and rubber for Elliot to be on his way. Imagine his mutterings of disbelief as the new steed is handed over and he swings his leg over it to begin again the joys of the open road...Elliot went on to finish the bike course in a little more than one and a half hours befor emaking a very speedy transition of 40 seconds to begin the run route. Thankfully Elliot’s run was not a venue of further suffering, where I know of at least one tumble and at least one lost shoe. His run proved to be a respectable 405 minutes to bring him home a single second past the two and a half hour mark. A great example of triumph over adversity. Superb.

I ought to add that what Elliot didn;t pass on to the organisers was that the tyres were a little soft and the bike was covered in sawdust having not been used for a few weeks, and being stored in our shed! I guess it didn't matter :-)

It was a great event. Very friendly. Think I might be inspired to do it next year.