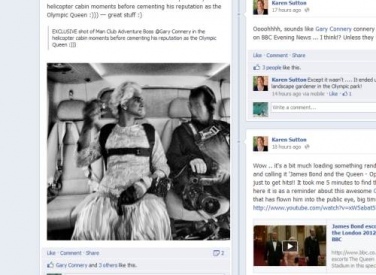 Pretty chuffed with my talent spotting.

Gary Connery is our headline speaker for the Saturday night of the inaugural Buxton Adventure Festival in October. I noticed last week that he posted on Facebook to say that he had attended a dress rehearsal for the Olympics opening ceremony. I thought nothing more of it at the time, figuring that they had to have a dummy audience and that he had simply been invited along somehow.

On Friday night as James Bond escorted the Queen from Buckingham Palace into a waiting helicopter it suddently dawned on me what was about to happen. Of course, the Queen was going to jump out of a hekicopter and land in the stadium to officially open the games. Well, clearly the Queen wasn't going to be doing the actual jumping, but I know a man who would be! Sure enough Gary has been active on Facebook again this week posting a picture of himself sitting in the helicopter wearing a Royal Dress!

Should give him even more to talk about at the event...