Our kids first bikes were basic affairs, heavier than lead, ineffective brakes and with tiny wheels. They'd both actually started off on balance bikes (bikes with no pedals that teach them how to balance a bike), but their first proper bikes were testing beats. The key factor was that they were free, handed down from kids who had grown out of them to clear space in garden shads and garages. A few enlightened friends had bucked this trend of natural recycling (pun intended) and shelled out some serious money for Isla Bikes for their kids. When I say serious money I'm basing this on the rationale that when you can get something for free, any amount of money spent on something needs justifying, and a couple of hundred quid means it's got to be something special you are buying.

So, what's so special about an Isla Bike? First and foremost they are light, as little as half the weight of some of their equivalent models. That's a serious consideration mainly for your kids - they will be able to cycle further, faster, and more easily, as well as being able to carry and push their own bikes when the going gets tough. It also helps when you end up carrying a bike back from the park or loading it into the car. Secondly the geometry works. Geometry is the shape of the bike frame, the angles of the tubes, the position of the wheels relative to the body, the length of the cranks etc. Isla have clearly put a similar amount of effort into designing their bikes as most of the main suppliers put into their adult ranges. Again it benefits your kid by essentially making cycling easier. Thirdly the components are worth looking after. On their first bikes neither of our boys could even reach the brake levers let alone use them. As a result there's little point in servicing them and the spiral of decline speeds up. Isla have designed levers that are closer to the handlebar grips, with a smooth action, meaning that braking, and braking effectively is a reality. This means you have to worry less about their stopping ability and opens up a whole new world of opportunity. Gears are similarly high spec and easy to use - though persuading them that it's worth changing up out of 1st is a challenge in itself as they slowly cycle along, legs a blur going like the clappers! (Correct use of) gears means the ability to cycle up hills, and as importantly, to cycle along the flat at a decent speed. 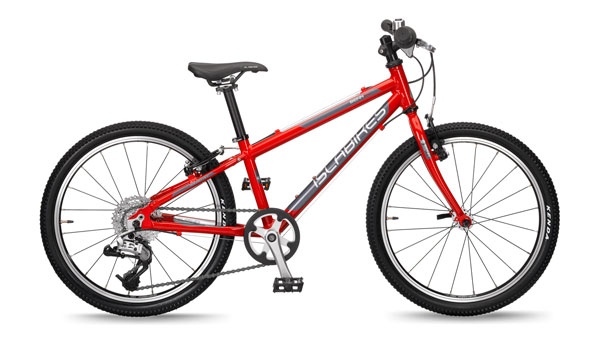 Size wise we ignored some of the on-line advice about making sure that the bike fits your kid perfectly and went for something a little on the large side that they will grow into. At the end of the day it's still a chunk of money to shell out and if we can do this every 3 or 4 years as opposed to every other, then that's a compromise we're happy to make. Our youngest is nearly 5, is 1m 5cm tall, and perfectly happy on the Beinn 20 Small. Initially he was a bit wobbly getting on and off, but this passed after the first session down the park - helped in large part by the fact that the bike is so easy to get going and actually cycle. It has the added benefit that he now zips along at a similar speed to his older brother who is also on 20 inch wheels.

As the bikes clearly have some value to them we've instilled in the boys a sense of ownership, encouraging them to lean them against a wall or tree rather than throw them to the ground, putting them away in the shed after a ride rather than letting the rain clean them! The thinking behind this is a) to teach them to value stuff and not take it for granted, and b) to keep their re-sale value high. Currently one of the selling points for these bikes is their second hand prices are kept high by the build quality and lack of competition. As long as these two things remain, it's possible to get upwards of 75% of the initial outlay back on ebay. It might be lightly bothersome to do so, and it does undermine the concept of passing stuff on to friends and family, but it also makes the initial outlay feel less of a burden.

All in all cycling has now become something that they both want to do as opposed to something to suffer. We coincided the upgrade to decent bikes with the acquisition of a new tow-bar mounted bike rack which has removed another hurdle from the process of going biking. As a result we are now out most weekends. I definitely started out as a parent thinking that a bike was a bike and that kids would learn to ride them whatever they were given, but have humbly changed my opinion and would suggest that if you want your kids to enjoy cycling, get them an decent bike from the word go.

If you want further proof here's a little anecdote. In September I helped organise a Sportive cycle ride to raise money for our local community shop project. We had over 200 riders on the day. There was a family ride over some tough local farm tacks, requiring mountain bikes. Then there was a 51km and an 108km road ride. Unbeknown to us somebody turned up on the day with a 5 year old lad who had very slick tyres on his bike. They opted out of the family ride as the terrain was too tough for his tyres, and instead embarked on the 51km ride with his parents. We got wind of this as other riders trickled in talking of the amazing family (there was an older sister too I think) who were making their way around the course. By that time there was nothing we could effectively do so we let them finish, slightly upset that they'd ignored the guidelines that suggested that the ride wasn't really suitable for young kids, but also more than slightly impressed that a 5 year old might make it all the way around! I said to the fellow organisers - I'll be he's on an Isla Bike. When he arrived back, 6 hours and 15 minutes later, he casually rolled into the car park to collect his biscuit medal amidst cheers from everybody there, on - you guessed it - an Isla Bike with 20 inch wheels, gears and slick tyres. It was a real eye opener and the final argument that convinced us to switch.

I purposefully didn't delve into the weights and component specification of the bike as it's one bike in a range of different sizes and types, all of which are listed on their website.

The Beinn 20 Small retails at £299 and is worth every penny.