This is the second Isla Bike we've had. The first was a Beinn 20 Small and was reviewed here. That was for our youngest and since the review he has gone from strength to strength on the bike. I'd say that it has revolutionized (excuse the pun!) his riding.

Seeing the obvious benefits of the Beinn 20, and having the differences between it and our eldest son's cheap bike made abundantly clear, we decided to furnish him with one too. He's not quite 8 yet, but we took a gamble and opted for the Beinn 26 on the assumption that he would a) grow into it instead of out of it, and b) would manage perfect well for the first few months. It also came with slick road tyres and a set of amazing waterproof Ortlieb Panniers.

As you'd expect, the bike arrives in a large cardboard box. It took us half an hour or so to unpack it, remove the plastic security bits that stop the forks flexing in transit, and to connect and tighten everything up as necessary. Once that was done we were away.

True he had to stretch to get onto the thing the first time, and looked a little like Bambi on ice to begin with, but as soon as the wheels were rolling and he found his centre of gravity he was away and there was no stopping him. We live at the bottom of a VERY steep hill, one that strikes fear into the hearts of most cyclists at its mere mention. In at the deep end we head up the lower (and steepest) section of the hill to a friend's house half a mile away. Amazingly, dropping it into the lowest of the 8 gears, he made it all the way, first go! The difference between this bike and his previous one, which also had gears, is huge. It's a combination of good gears that work smoothly, decent frame geometry, and light weight. I think that the weight is the main factor. It weights in at 9.46kg (though on this first ride it also included an aluminium pannier rack and two panniers!  That's seriously light. To illustrate how light, a couple of weeks later we took the boys for a long ride locally which included a mile of steep up hill through the woods. Unrideable, they walked and I carried both of their bikes, one in each hand. It was tough work, but the thought of doing that with their two old machines doesn't bear thinking about.

Aside form the light weight there are plenty of other features which make the bike stand out as ideal for kids. The gears Sram gears are integrated into the hand grips on the handlebars and are light enough for him to twist without help (note that my youngest struggle with his equivalent ones on the Beinn 20). The brake levers are closer to the handlebars than on adult bikes meaning that he has the confidence of being able to reach them easily. And they work very effectively.

It also has a bell which he uses to great effect whilst weaving in and out of pedestrians on the local cycle tracks! 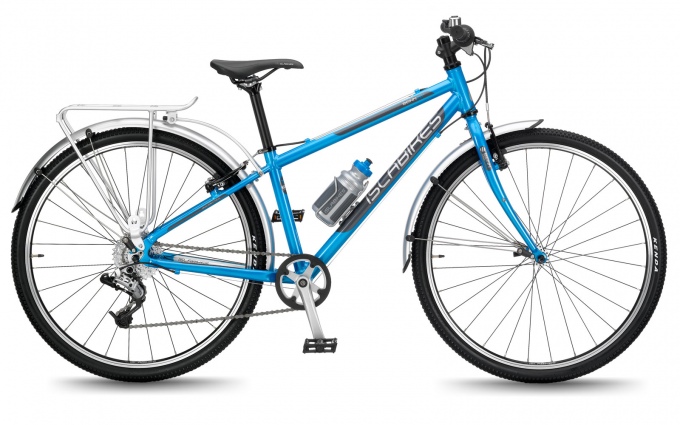 If I had one quibble (with both bikes) it's the rubber handlebar grips. Despite repeated instruction to carefully lean the bikes against a wall on the non-chain side, with two points of contact, it is often dropped to the ground in haste to stop and investigate the latest badger set or funny shaped stick that's grabbed their attention. To give them credit they both do always now drop their bikes chain-side up, but drop them the do. As a result the grips, especially on the non-chain side, are disintegrating. The grips also come loose pretty easily and work themselves away from the headset. Sure we can re-glue them with hair spray, but given the attention to detail on every other aspect of the bike it surprises me that they haven't sorted this.

He's now been riding the bike for about 6 weeks and, despite the fact that it's a little on the large side for him, is perfectly happy on it. Over the easter holidays we were on a campsite in France with a gang of other kids (and their parents!). The kids spent a whole day building and jumping ramps on the campsite. He was a little more ungainly in the air on his bike than some of the smaller ones, but pon the flp side, when we went for a ride into the forest he was away like a rocket! On one occasion I had forgotten lunch in the car. We'd been walking, and the kids riding, and we were about a mile and a half from the car when we stopped for lunch and made the discovery. So I jumped on his bike and nipped back to the car. 10 minutes later I was back. I'd had to stand on the pedals most of the way as I am six foot five, but the bike performed without fault and gave me no cause for concern with my extra weight being put through the components on rough forest tracks.

We opted for slick road tyres and much of the riding that we do is on smooth cycle tracks - usually old railway lines - around the Peak District. I was pleasantly surprised to see that these came on the bike, but that it was also supplied with the standard basic off-road tyres. Whilst in France and mainly on forest tracks (and doing jumps in the campsite) we put on the knobbly tyres.

Having negelected to put mud guards on the first bike we got some for this second one. They are lightweight aluminium guards that adjust easily with a screwdriver (straight blade or Phillips). When we changed tyres we needed to make a little more space for the knobblier ones, but it was a 30 second job to do so for each wheel. Glad e got these.

We'd also opted for a set of rear panniers. The bike came pre-fitted with a very snazzy lightweight aluminium rack and it was a very quick process to clip on the panniers. They are Ortlieb Front Roller City panniers (basically the size that an adult would use on the front). Each is plenty big enough for a sleeping bag and probably some more, with a waterproof roll-top closure. The carry handle on the top of each has a dual action release mechanism that opens two curved hooks which sit on the top rail of the rack. As you drop the pannier into place and the weight transfers from the carry handle to the rack, the spring loaded hooks retract and lock onto the frame. To remove them you simply pull the bag up by the carry handle which releases the hooks and lifts the bag all in one smooth action. Very nice! On the back side of each bag there is a curved plastic groove with a plastic bracket that you can position wherever needed in the groove so that as you drop the panier into place the bracket automatically sits behind the down-stay of the rack, thus stopping any side to side motion as you go around corners. Really can't fault them. A great addition to the bike, and also pretty light weight. We left them on for the first week or so for the novelty factor, but have now taken them off in order to preserve their waterproof nature for a planned bike trekking trip later this year. 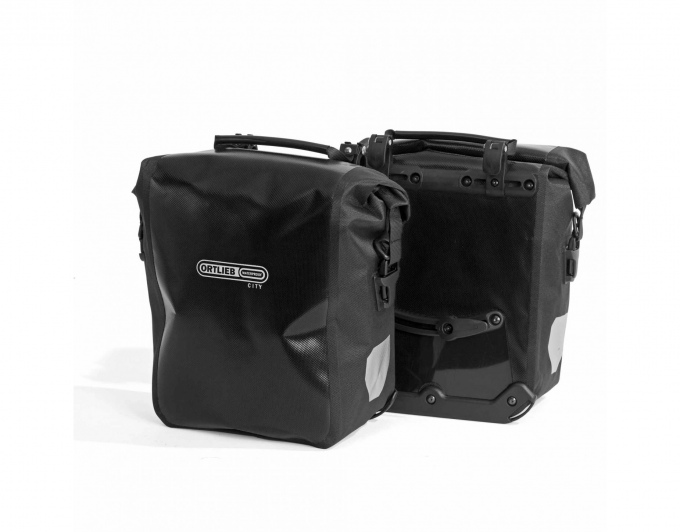 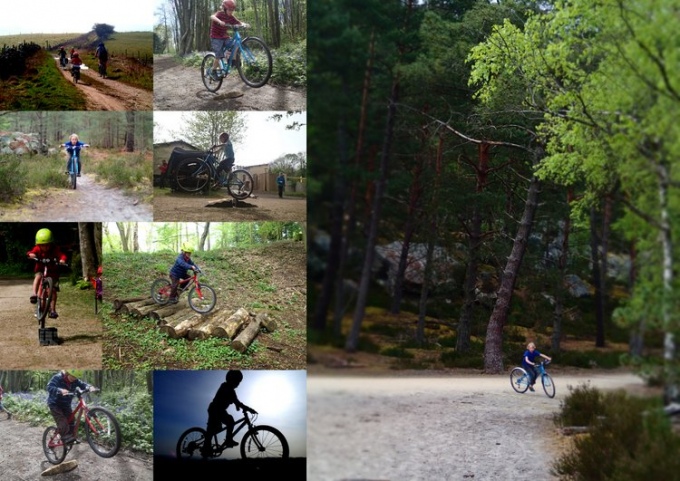 Some photos of the bikes in action.

Note that Islabikes will be exhibiting at Cliffhanger 2014 in Millhouses Park in Sheffield on June 21 and 22.