The Edelrid Eagle Light is a 9.5mm single rope that is light enough to use in pairs for trad climbing as well as singly whilst sport climbing. The 60m model (comes available as 50m, 60m, 70m and 80m) weighs in at 3.72Kg (or 60g per metre) which means that lugging a pair of these into Cloggy or further afield is not ideal, but they are perfect for the likes of Tremadog or Gogarth where the compromise between weight and performance is bang on. Having a pair of these at 60m also means that I can get away with only taking one of them to most Griststone crags, and simply doubling it up when two ropes are needed.

Whilst no rope is fully waterproof these are as repellent of the stuff as any that I have used. When unpacking and uncoiling / re-coiling for the first time I'd advise extreme caution to do it in a controlled environment - i.e. your living room floor. I did with one and all was fine. The other I was more casual about and spent a frustrating half hour trying to get myself out of the mess. Essentially the ropes, when in their factory state, are slick as a very slick thing which makes handling a dream, but only if you are careful. They come with the centre points marked indelibly and with the ends taped neatly (and with a reminder of the length marked on lest you should forget!

Once over the initial coiling the ropes have handled beautifully. They are very supple. Putting them into a belay device with cold fingers is a doddle, whilst tying in s straight forward. No sign of any knot slippage whilst tied in for prolonged periods, though I do of course use stoppers to minimise this. My lads, who are getting into their climbing, are able to use them easily enough with smaller hands and fingers.

Retailing at around 180 Euros a piece there is no getting away from the fact that climbing ropes are expensive, but the fact remains that they are your number one life saving safety equipment so don't scrimp. The Eagle Light represents a very good all round rope.

No better endorsement of a rope than to tie your 6 year old to the end of it on a Pembroke sea cliff :-) 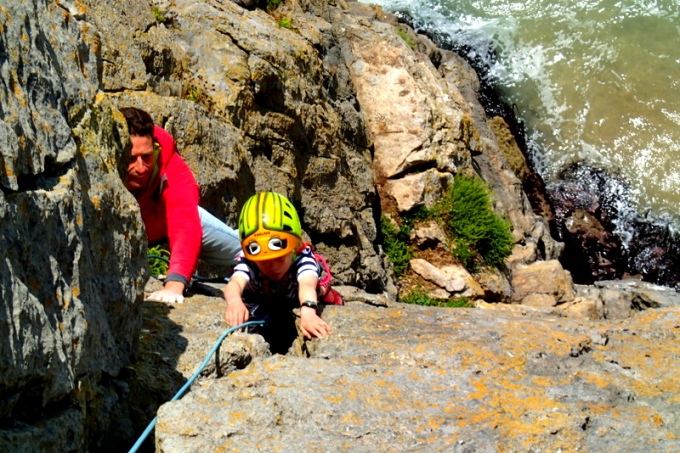