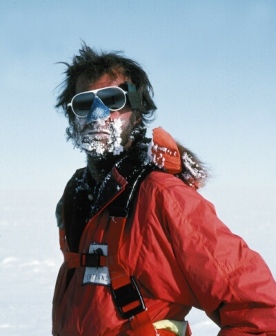 Sir Ranulph has, through his expeditions, raised large amounts for charities. He has led 22 major expeditions to remote parts of the world including to both Poles and (with Mike Stroud) last year successfully completed the challenge of running 7 marathons, in 7 days on 7 continents only 3½ months after a massive heart attack and double by-pass operation.

He planned, organised and took part in the first polar circumnavigation of Earth., personally raising over £29 million in sponsorship (1900 sponsors from 18 countries) along the way

Other expeditions include the discovery of the lost Arabian city of Ubar, The first hovercraft ascent of the Nile, the first crossing of Antarctica and the Arctic Ocean, and the first unsupported crossing of the Antarctic Continent.

He is the author of several books including The Feather Men (a UK No 1 Best Seller), Beyond the Limits, and his latest, Captain Scott, the best-selling biography of 2003.

If you want your audience, large or small, both entertained and inspired, Sir Ranulph Fiennes is your speaker. He tells with humour how from inauspicious beginnings and false starts he reached the pinnacle of his chosen profession. He won through against international rivals, by hard work, enormous commitment, lateral thought and teamwork to achieve goals previously considered impossible

You can choose either a 30 to 45 minute talk without illustrations or a one hour illustrated presentation. Sir Ranulph is also happy to be involved in Question and Answer sessions. He also presents awards, prizes and opens new ventures of all kinds.